Rundle Mall is a pedestrian street mall located in Adelaide, South Australia. It was opened as a pedestrian mall in September 1976 by closing the section of Rundle Street between King William Street and Pulteney Street, to vehicular traffic. The street continues as Rundle Street (as before) to the east and Hindley Street to the west.

The pedestrian mall has become the centerpiece of Adelaide's city centre, home to some of the most expensive real estate (per square metre) in the state. It competes with the large shopping complexes in the suburbs, (e.g. Westfield Marion, Armada Arndale Shopping Centre, Westfield Tea Tree Plaza, etc.) In 2009, retail space directly on the mall leased for up to $3,700 per square metre per year.

The mall is home to the South Australian flagship stores of many large Australian retailers and many smaller independent and chain stores. The mall also features a number of arcades and plazas containing smaller boutiques and eateries. These include the Italianate-style Adelaide Arcade (also being the first retail establishment in Australia with electric lighting, and allegedly home to six ghosts), Regent Arcade, Gay's Arcade, City Cross, Southern Cross, Adelaide Central Plaza, Myer Centre, Renaissance Arcade, and Rundle Place.

There are usually several buskers performing in the mall, licensed by the Adelaide City Council. The mall's stores are generally open seven days a week. 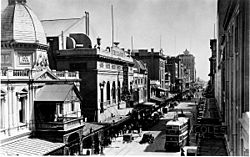 Rundle Street looking west, 1938. Adelaide Arcade and the then Regent Theatre on the left.

Rundle Street, from which the mall takes its name, is named after John Rundle, a member of the British House of Commons and an original director of the South Australia Company. The street was named on 23 May 1837 by the Street Naming Committee. In 1895, the first electric street lighting was installed at the intersection of Rundle Street (as it was then), King William Street and Hindley Street. It also had a tramline run through it when it was still part of Rundle Street.

In November 1972, the then South Australian Premier, Don Dunstan, issued the closure of the western part of Rundle Street to create Rundle Mall, due to extreme congestion caused by traffic and the increasing number of pedestrians. It opened on 1 September 1976. Other than police and other government vehicles, drivers need permission to drive on the pedestrian strip. The mall is a dry zone as well as a smoke-free zone. 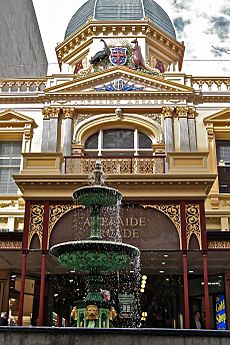 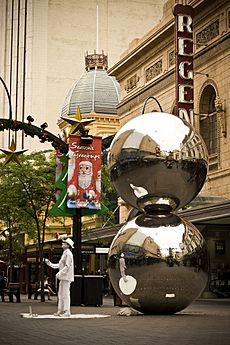 The Spheres, known colloquially as "The Mall's Balls", in November 2008.

There are several items of modern sculpture in the mall. The best-known is the 4 metre tall The Spheres by Bert Flugelman; two large stainless steel spheres with a diameter of 2.15 metres balanced one on top of the other. They are most commonly referred to as the Mall's Balls or Rundle Mall balls. "The Mall's Balls" are a common meeting place for visitors to the mall. Erected in 1977, they were commissioned by the then Hindmarsh Building Society (subsequently absorbed into the Adelaide Bank) and donated to the City of Adelaide to mark the building society's 1977 centenary.

Other sculpture includes a group of life-size bronze pigs − Horatio, Truffles, Augusta and Oliver - rooting around a rubbish bin.

Of note is the historic Beehive Corner, completed in 1896. It lies at the western end of the Mall, on the corner of King William Street, and was originally owned by John Rundle. Beehive Corner is built in the Neo-gothic style, which is generally reserved for churches. The Mall also contains a fountain (The Fountain) that is painted in Victorian colours and was cast in the late 1800s.

Not to be left in the dark, Rundle Mall also boasts the ELITEM Rundle Mall Super Screen—a 35SQM P12 LED display which broadcasts city and state notices as well as other local business messages. Another noteworthy large lighting display is the Rundle Lantern which marks the eastern end of Rundle Mall and the beginning of Rundle Street.

Towards the end of 2014, there was work being undertaken to demolish the café which was located near the junction with King William Street, and build an open area replete with benches. The Adelaide City Council info centre was also relocated to the other end of the strip. More work was completed toward the end of 2014.

In 2013, there was giant cockroach statue added to the mall. This statue was salvaged from a junk yard and cleaned up, before being placed in the mall. Police reported two men for dragging the statue six metres along the mall.

In 1995−96, the mall received its first major upgrade. The upgrade saw most of the mall's fixtures replaced and the erection of permanent market stalls down the centre of the mall. The market stalls were later demolished as part of a 2013 redevelopment.

There were also some escalators in the middle of the Rundle mall in the 1990s, but this was taken down later.

In 2013, the Adelaide City Council commenced a $27 million upgrade of the mall that was completed in four stages over a 16-month period. New paving, benches, trees, bins, a multi-purpose structure and ground services were installed. The Rundle Mall master plan also included a catenary lighting system to be supported by four 20m poles at either end of the mall and brackets on a number of building facades.

In June 2015, it was announced that an additional cost of $3 million was required to complete the lighting system and to undertake further storm water works in the mall.

The catenary lighting system for the mall was completed in November 2015 after being delayed by several months. 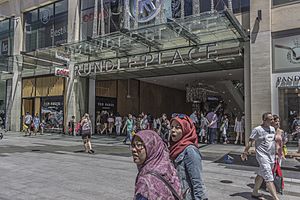 The majority of buildings on the Mall contain a small number of retail tenancies. There are also many larger arcades and shopping centres that lead off the Mall or blocks around it. No single company or organisation owns a significant proportion of the Mall's real estate.

A number of public laneways lead off the mall, such as James Place, Charles Street, Twin Street and Gawler Place. These are home to more retail tenants.

All content from Kiddle encyclopedia articles (including the article images and facts) can be freely used under Attribution-ShareAlike license, unless stated otherwise. Cite this article:
Rundle Mall Facts for Kids. Kiddle Encyclopedia.