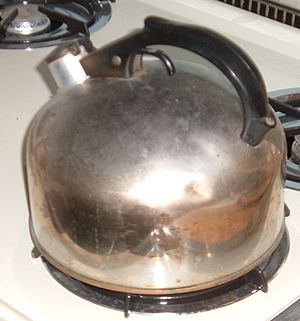 A kettle is a type of pot that is used in a kitchen. It is used to make water hot or to boil water. It comes from the Latin word catillus ("deep pan or dish for cooking").

In the past, kettles were made of metal bins like copper. Kettles were put on a rack or a hook above the fire to become hot. Now, metal kettles are put on the stove or rangetop. Sometimes they are made of ceramic or clay.

Now, some people have electric kettles. These kettles plug into the wall and use electricity to generate heat. They are usually plastic or metal. They heat water faster than kettles on a stove. Kettles are often used to make tea.

They are more common in the United Kingdom and the Commonwealth than other places like the United States.

All content from Kiddle encyclopedia articles (including the article images and facts) can be freely used under Attribution-ShareAlike license, unless stated otherwise. Cite this article:
Kettle Facts for Kids. Kiddle Encyclopedia.