Bomaderry (locally known as "Bommo") is a town in the Shoalhaven council district area of New South Wales, Australia. At the 2016 census, it had a population of 6,661 people. It is on the north shore of the Shoalhaven River, across the river from Nowra, the major town of the City of Shoalhaven, of which Bomaderry is locally regarded as being a suburb of the city. 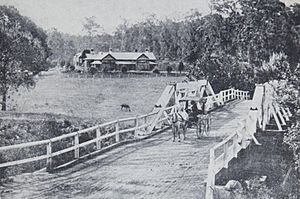 Bomaderry township was opened in 1892. It was previously part of the Shoalhaven Estate owned by David Berry whose brother Alexander Berry had built a road to the area in 1858. When David died in 1889 the estate was sold in portions. The subdivision plans for Bomaderry are shown. In 1893 the railway was extended to Bomaderry and the town began to grow from this time.

One of the first houses in Bomaderry was Lynburn which still exists today. It was built in 1895 by the architect Howard Joseland for Jane Morton, the widow of Henry Gordon Morton, the manager of the Shoalhaven Estate. A photo shortly after its construction is shown. The road over the bridge in the photo is now the Princes Highway where it crosses Bomaderry Creek.

After the town opened in 1892 several factories moved into the area. Messrs Denham Bros. built a bacon and ham factory in about 1900. A milk condensery opened in 1901 which was originally located near the railway station but later moved to the bank of the Shoalhaven River close to Bolong Road. In 1912 the Nowra Co-op Dairy Company established a milk Depot at Bomaderry and this was a major boost to the local economy for many years.

Bomaderry High School is one of the major high schools in the Shoalhaven, holding places in state debating, public speaking, sporting and dance eisteddfod. Nowra Anglican College is a K-12 school located in Bomaderry. Bomaderry Public School is the main primary school in the area with over 250 students.

Its railway station is the terminus of the South Coast railway line, which is part of the NSW TrainLink network. Bomaderry has public bus services both within the suburb and to neighboring areas. These were significantly expanded in 2020, with 45 new routes announced.

All content from Kiddle encyclopedia articles (including the article images and facts) can be freely used under Attribution-ShareAlike license, unless stated otherwise. Cite this article:
Bomaderry, New South Wales Facts for Kids. Kiddle Encyclopedia.