Jervis Bay is a 102-square-kilometre (39 sq mi) oceanic bay and village on the south coast of New South Wales, Australia, said to possess the whitest sand in the world. It is surrounded by Jervis Bay Village and Wreck Bay Village.

In mid 1797, survivors of the wreck of Sydney Cove passed through the area on foot, while undertaking an arduous trek of 600 kilometres in an attempt to get to Port Jackson (Sydney) – only three of them completed the journey.

Alexander Berry's takeover of land in the Shoalhaven displaced Aboriginal people who were moved in 1822 to Wreck Bay. Smallpox significantly reduced local populations. A separate population of Aborigines, who settlers called 'the Jervis Bay tribe' - the Wandandian people - remained on their traditional lands on the bank of Currambene Creek (near Huskisson) and around St Georges Basin, until well into the C20th.

In 1841, the private township of South Huskisson on Jervis Bay was founded as a seaport and terminus of The Wool Road. It was renamed Vincentia in 1952.

The land now comprising the Jervis Bay Territory was surrendered by the state of New South Wales to the Commonwealth Government in 1915 to provide a seaport for the new Federal capital under construction at Canberra, which would be Australia's only inland capital.

In the late 1960s, Australia's first nuclear power plant was proposed for the area, and a site was prepared. However, the project did not proceed.

Jervis Bay is a drowned river valley and formed 15,000 years ago, at the end of the last ice age. The bay took on its present appearance around 4000 BC after the sea levels had risen 120 metres (390 ft), and as sand dune barriers created the southern peninsula. Much of the rock in Jervis Bay is part of the Sydney Basin sandstone formation, which is 280-225 million years old, although lower areas are overlain with Tertiary-era sediments.

Several features at Jervis Bay have been used as evidence that the Australian coast experienced many giant tsunamis prior to European colonisation.

In the Jervis Bay Territory on the southern side of the bay are the settlements of Greenpatch, Hyams Beach, and Bowen Island. From north to south on the New South Wales shore of the bay are Callala Beach, Callala Bay, Huskisson and Vincentia. Beecroft Peninsula, on the northern side of the bay, has been used as a bombing range by the RAN. Point Perpendicular forms the southern end of the peninsula. Jervis Bay is approximately a three-hour drive south of Sydney. A door-to-door shuttle service is available between Sydney Airport and the South Coast everyday.

Some 158 km2 (61 sq mi) of the land on both sides of the bay have been identified by BirdLife International as an Important Bird Area (IBA) because the coastal heathland supports the largest sub-population of the endangered eastern bristlebird, isolated from other sub-populations.

Jervis Bay has been recorded as having the whitest sand in the world.

Jervis Bay looking through the heads, with 10 Royal Australian Navy ships at anchor, on 6 February 2006. Visible on the horizon are Bowen Island and Point Perpendicular. 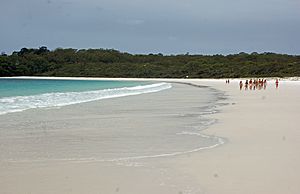 Jervis Bay is also known for whale watching, because whale migration, both north and south, can be observed as the animals pass the entrance to the bay, frequently entering the sheltered waters to rest. The majority of whales sighted at Jervis Bay are humpbacks, which migrate along Australia's east coast from June to November. Southern right whales are also showing a slow but steady increase in recent years as they re-colonise former habitats, having been extensively hunted in the 19th and 20th centuries. Other species sighted have been false killer whales, orcas, minke whales and, on one occasion, a blue whale.

Tourism in Jervis Bay is one of the most important avenues of income for many of the local residents, with many businesses orienting themselves towards it. The Jervis Bay Visitors Information Centre is at Huskisson, and is part of the Lady Denman Maritime Museum and Gallery. Local council-managed visitor information centres are at Nowra and Ulladulla.

The first commercial aquaculture licence for an area in the bay was granted in 2015, for an enterprise which started growing blue mussels. They also found abundant Angasi oysters and scallops growing on the lines which they dropped at first, but the industry focus is on the blue mussels, which have a high ratio of meat to shell. The first full-scale commercial harvest of blue mussels was scheduled for November 2020. The potential of growing seaweeds for commercial use is also being explored, and Shoalhaven City Council is investing A$2.3 million to develop a wharf, boat maintenance facility and other infrastructure needed to service the industry. It is hoped that the industry will create up to 1,000 jobs.

Jervis Bay experiences an oceanic climate (Köppen climate classification: Cfb), with average maximum temperatures varying from 16°C in winter to 25°C in summer tempered by sea breezes. The highest recorded temperature is 42.1°C in January, and the lowest 4.7°C in August.

Hot summer evenings are often relieved by a front of rapidly moving cool air known as a southerly buster.

Rainfall is fairly evenly distributed throughout the seasons, with a bias to the first half of the year, due to prevailing easterlies. Short high intensity rainfall events may happen at any time of the year and can lead to local flooding. Jervis Bay also experiences thunderstorms during the warmer months bringing lightning, heavy rain and occasionally hail.

Yearly rainfall is influenced by the El Niño-Southern Oscillation.

All content from Kiddle encyclopedia articles (including the article images and facts) can be freely used under Attribution-ShareAlike license, unless stated otherwise. Cite this article:
Jervis Bay Facts for Kids. Kiddle Encyclopedia.