False killer whales (Pseudorca crassidens) are cetaceans and larger members of the oceanic dolphin family (Delphinidae). The species is the only member of the Pseudorca genus.

The false killer whale has not been extensively studied in the wild by scientists; much of the data has been obtained by examining stranded animals.

The false killer whale appears to have a widespread, if small, presence in tropical and semitropical oceanic waters. A few have been found in temperate water, but these are probably stray individuals. Their most common habitat is the open ocean, though they also frequent other areas. They have been sighted in fairly shallow waters such as the Mediterranean Sea and Red Sea, as well as the Atlantic Ocean (from Scotland to Argentina), the Indian Ocean (in coastal regions and around the Lakshadweep Islands), the Pacific Ocean (from the Sea of Japan to New Zealand and the tropical area of the eastern side), and in Hawaii. Recently, a pod of false killer whales was observed hunting down a small species of shark in Australia.

A false killer whale and a bottlenose dolphin mated in captivity and produced a fertile calf. The hybrid offspring has been called a “wholphin”. 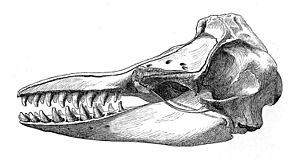 Illustration of the skull of a false killer whale 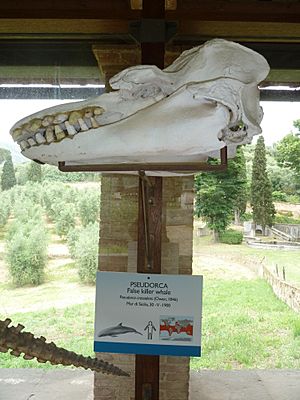 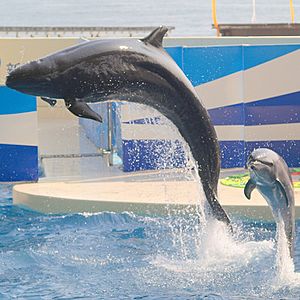 False killer whales are kept in captivity and studied in the wild by scientists. Several public aquaria display them. For example, Okinawa Churaumi Aquarium in Japan displays false killer whales in the Okichan Theater.

These whales have been known to approach and offer fish they have caught to humans diving or boating.

Scientists have undertaken research to understand more about the species—including population surveys, satellite-tagged individual whales, and carcass studies. From these studies, they determined information about habitat, range, and distinct populations. Recent study of the local population of false killer whales in Hawaii shows evidence of a dramatic decline over the last 20 years. Five years of aerial surveys from 1993 through 2003 show a steep decline in sighting rates. Group sizes of the largest groups documented before 1989 surveys were almost four times larger than the entire 2009 population estimate. 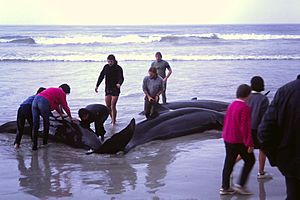 On July 30, 1986, a pod of 114 false killer whales became stranded at Town Beach, Augusta, in Flinders Bay, Western Australia. In a three-day operation, coordinated by the Department of Conservation and Land Management, volunteers carried 96 of the whales on trucks to more sheltered waters, and then successfully guided them out into the bay.

On June 2, 2005, up to 140 (estimates vary) false killer whales were beached at Geographe Bay, Western Australia. The main pod, which had split into four strandings along the length of the coast, was successfully moved back to sea, with only one death, after 1,500 volunteers intervened, coordinated once again by the Department of Conservation and Land Management.

As of July 2014, no record of an orphaned infant of the species surviving to adulthood after stranding has been reported, but veterinarians expressed hope about the prospects of a six-week-old male calf found on the shores of North Chesterman beach, near Tofino, British Columbia. He was found in critical condition on 11 July 2014, and received care at the Vancouver Aquarium.

All content from Kiddle encyclopedia articles (including the article images and facts) can be freely used under Attribution-ShareAlike license, unless stated otherwise. Cite this article:
False killer whale Facts for Kids. Kiddle Encyclopedia.