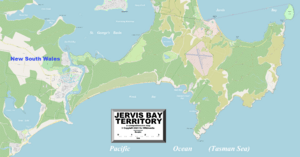 The Jervis Bay Territory is an internal territory of the Commonwealth of Australia. It was surrendered by the state of New South Wales to the Commonwealth Government in 1915 so that the landlocked Australian Capital Territory would have access to the sea.

It was administered by the Department of the Interior (and later by the Department of the Capital Territory) as if it were part of the Australian Capital Territory, although it has always been a separate Commonwealth territory. The perception that it is part of the ACT stems from the fact that under the terms of the Jervis Bay Territory Acceptance Act, the laws of the ACT apply to the Jervis Bay Territory. In 1989, when the ACT achieved self-government, the Department of the Arts, Sport, the Environment, Tourism and Territories took over responsibility for the JBT's administration, and it has since been administered by various Commonwealth departments responsible to the Minister for Territories.

The bay was sighted by Lieutenant James Cook aboard HMS Endeavour on 25 April 1770 (two days after Saint George's Day) and he named the southern headland Cape St George.

In August 1791 the bay was entered and named by Lieutenant Richard Bowen aboard the convict transport ship Atlantic of the Third Fleet in honour of Admiral John Jervis, under whom he had served. In November 1791 Master Matthew Weatherhead aboard the Matilda entered the bay to undertake repairs.

Survivors of the Sydney Cove shipwreck in 1797 reached the area by foot, heading to Port Jackson.

John Oxley, an English explorer and surveyor, travelled from Sydney by sea to explore the bay in 1819.

At the 2011 census, an estimated 377 people lived in the territory, the majority working and living at the Royal Australian Navy base, HMAS Creswell.

The area of land and water owned by the Wreck Bay Aboriginal Community Council in the JBT is approximately 68 km2 (26 sq mi), which is about 90% of the land. The remaining land in the JBT is managed by the Department of Infrastructure and Regional Development. There is an Aboriginal community at Wreck Bay in the Booderee National Park.

Vincentia is the nearest town, roughly 3 km (2 mi) north of the border. 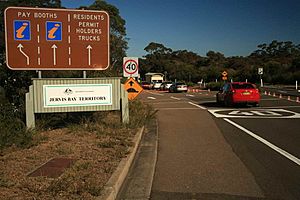 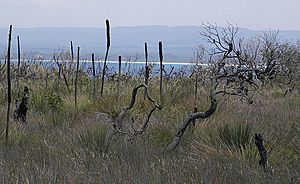 Having 65.7 km2 (25 sq mi) of land and 8.9 km2 (3 sq mi) marine reserve, Jervis Bay Territory is the smallest of all the mainland states and territories of Australia. Jervis Bay is a natural harbour 16 km (10 mi) north-south and 10 km (6 mi) east-west, opening to the east onto the Pacific Ocean. The bay is situated about 198 km (123 mi) south of the city of Sydney, on the southern coast of New South Wales. The nearest city is Nowra, about 40 km (25 mi) on the Shoalhaven River to the north. The majority of Jervis Bay embayment is part of Jervis Bay Marine Park (NSW State) but the waters within JB Territory are part of Booderee National Park (Commonwealth). [Booderee National Park was formerly known as Jervis Bay National Park (Commonwealth)].

A wide variety of flora and fauna are native to the Booderee (aboriginal: bay of plenty) National Park with approximately 206 species of birds, 27 species of mammals, 15 species of amphibians, 23 species of reptiles and 180 species of fish native to the area. The park itself encompasses approximately 90% of the territory of Jervis Bay and covers the overlap between Australia's northern and southern climatic zones.

Ancient sand dunes overlay the sedimentary bedrock formations formed from upheaval of the surrounding marine environment 280–225 million years ago. The park was designated sacred Aboriginal land in 1995. A significant portion of the bay's northern coast and headland forming Beecroft Peninsula and ending at Point Perpendicular and surrounding area is a gun bombardment range for the Royal Australian Navy (RAN).

Bowen Island, at the entrance to the bay 230 m (750 ft) north of Governors Head, is 51 ha (130 acres) in area. It has rookeries for the little penguin Eudyptula minor at the northern extent of its range.

Jervis Bay looking through the heads, with 10 Royal Australian Navy ships at anchor.

There are two small towns or villages in the Jervis Bay Territory. They are both covered by postcode 2540. Listed from north to south, they are:

There are four private leasehold holiday properties in Jervis Bay Territory, within but not part of Booderee National Park. Located on the western side of the territory, across from Sussex Inlet, they are Christian's Minde, Kullindi Homestead, RTBU Holiday Park, and the Bay of Plenty Lodges.

Within the Booderee National Park is HMAS Creswell, the Royal Australian Navy College named after Sir William Rooke Creswell, the Director of the Commonwealth Naval Forces which later became the RAN. The Jervis Bay Airfield is adjacent, operated by the RAN to support its Kalkara (Storm Petrel) pilotless target aircraft (Beech / BAe MQM-107 E). Kalkara are launched from the airfield and later recovered by parachute into the water and thence by boats maintained at HMAS Creswell, after target-towing exercises off the coast with ships or aircraft. Control equipment is sited at Bherwerre Ridge overlooking the sea to the east.

The territory was once the proposed location for a nuclear power plant. The project, which was to be on the south east corner of the Bay near Murray's Beach, was cancelled in 1971. This was after preparatory excavation and levelling had been done and an access road constructed between the site and the territory border. The levelled area is now the car park for Murray's Beach and its adjacent boat ramp.

All content from Kiddle encyclopedia articles (including the article images and facts) can be freely used under Attribution-ShareAlike license, unless stated otherwise. Cite this article:
Jervis Bay Territory Facts for Kids. Kiddle Encyclopedia.