Cape St George Lighthouse was a lighthouse that stood near Jervis Bay Village, Jervis Bay Territory, Australia. It was located about 3 kilometres (1.9 mi) south of the southern entrance to Jervis Bay. Constructed in 1860 it was active until 1889. The tower was destroyed between 1917-1922 to avoid confusion in daylight. The ruins remain and are listed on the Commonwealth Heritage List.

The recommendation to build a lighthouse on the vicinity was made in 1856. However, despite the fact that the Pilots Board, which was the controlling authority, was not consulted, £5000 were allocated and a tender was accepted.

Controversy started even before construction, when the Board received numerous communications and reports questioning the angles of visibility of the site from the north and south and its proposed and actual locations, which proved to be five miles apart.

Finally, when the Pilots Board examined the site, they reported that the initial map prepared by Millington and Dawson suffered from "discrepancies of so grave a character that it is impossible to decide whether either position marked on the map really exists." They also questioned whether the facility will be visible from the required approaches. Nevertheless, despite these facts and further disagreement by a majority of the Board, the lighthouse was commissioned on 1 October 1860. 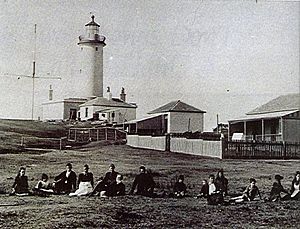 Historic view of the lighthouse

The resulting light was not visible from the northern approach to Jervis Bay, and was barely visible from the southern approach. When inspected by members of the Pilots Board it was found that on top of the inaccuracies, the contractor built the light 2.5 miles (4.0 km) north of the intended site, as it was closer to the quarry he was obtaining the stone from.

Later, a Select Committee was appointed by the New South Wales Government to investigate the errors in locating the lighthouse. The committee found out the Board had been grossly negligent in approving a location without prior inspection and in relying on maps of dubious accuracy. In conclusions it reported that "errors - very grave errors, highly censurable - have been committed in the erection of this lighthouse."

From 1864 to 1893 there were twenty three ships wrecked on the South Coast of New South Wales in the vicinity of Jervis Bay. The light was eventually replaced in 1899 by Point Perpendicular Light in Point Perpendicular, a much more suitable location for a lighthouse on this part of the coast. The lantern was removed and later used in the Crookhaven Heads Light, built in 1904.

After the commissioning of the new light, it was considered that the confusion of having two towers in close proximity to one another would be a hazardous to navigation in daylight, especially during foul weather. As a result, the Cape St George Tower was unceremoniously used from 1917 to 1922 for target practice by the Royal Australian Navy and destroyed.

On 22 June 2004 the lighthouse ruins were listed on the Commonwealth Heritage List with the following statement of significance:

The Cape St George Lighthouse ruins, built in 1859, are significant for their association with the development and establishment of navigational aids along the Australian coastline. Its construction is associated with the 1856 Lighthouse Commission which created the first Inter-colonial Agreement on the provision of lights around Australia (Criterion A.4). The ruins of the lighthouse and associated buildings are significant as an integral part of Australia's maritime history, because of their original incorrect siting. The ruins, despite their short working life, are significant for providing important information in the interpretation and understanding of an important phase in Australia's history (Criteria A.4 and C.1). The ruins, situated on a high clifftop, are significant for their aesthetic value. The fact that the lighthouse was incorrectly sited, the subsequent abandonment of the place and its reduction to a ruin add to its historical and landmark significance (Criterion E.1). The Lighthouse ruins are of historical significance as evidence of the settlement around it, which was the first on the Bherarerre Peninsula (Criterion A.4).

On 21 October 1980 the lighthouse ruins were listed on the (now defunct) Register of the National Estate.

The site is managed by the Wreck Bay Aboriginal Community and by the Department of the Environment, Water, Heritage and the Arts as part of the Booderee National Park.

The park service has stabilized the ruins against further decay. The ruins are located off Stony Creek Road, a gravel park road, about 16 kilometres (9.9 mi) southeast of Jervis Bay Village. Parking is provided nearby, and the grounds are accessible, though the ruins themselves are closed.

All content from Kiddle encyclopedia articles (including the article images and facts) can be freely used under Attribution-ShareAlike license, unless stated otherwise. Cite this article:
Cape St George Lighthouse Facts for Kids. Kiddle Encyclopedia.