Coen is a town and coastal locality in the Shire of Cook, Queensland, Australia. The town of Coen is inland on the Peninsula Developmental Road, the main road on the Cape York Peninsula in far northern Queensland. In the 2016 census, Coen had a population of 364 people.

The locality of Coen is on the western side of Cape York Peninsula with the Coral Sea forming its eastern boundary. Part of the northern boundary follows the Archer River, while the Coen River forms part of its western boundary. The Peninsula Developmental Road runs roughly north to south through the locality.

In 1623, Jan Carstensz, the navigator of the ship Pera of the Dutch East India Company named a river on Cape York Peninsula after Jan Pieterszoon Coen, the Governor-General of the Dutch East Indies. Today that river is known as the Archer River and the name Coen River is given to one of its tributaries.

Gold was discovered on the Coen River in 1876. Coen came into being first as a small fort built by gold miners and prospectors in May 1877 but this first gold rush quickly came to an end, and the settlement did not recover until 1883. It became a centre for several small goldmines in the region but, in 1893, the rich Great Northern mine boomed and the town became a more substantial place.

The Great Northern mine continued operations until 1916 and produced some 52,000 troy ounces (1,617 kg) of gold before it closed.

On 3 July 2014, Barry Port retired from the Queensland Police. He was Australia's last Aboriginal police tracker. In his 36 years working for the police, he has tracked criminals, missing people and stowaways.

Today Coen provides services to the region, and is an important supply point on the long unpaved road leading to Weipa and other northern communities. It is a popular stopping point for tourists driving to the tip of Cape York - the northernmost part of the Australian mainland. 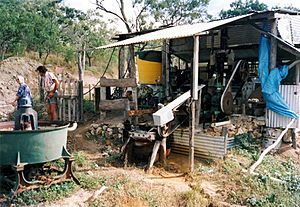 Coen is an ideal destination for birdwatchers: there are good accommodations and a large and varied bird fauna with representatives from rain forest, monsoon forest and coastal forests.

Coen has a number of heritage-listed sites, including:

All content from Kiddle encyclopedia articles (including the article images and facts) can be freely used under Attribution-ShareAlike license, unless stated otherwise. Cite this article:
Coen, Queensland Facts for Kids. Kiddle Encyclopedia.