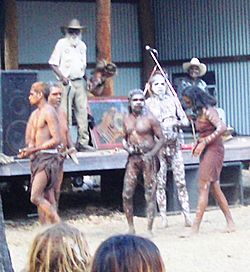 Laura is a rural town and locality in the Shire of Cook, Queensland, Australia. In the 2016 census the locality of Laura had a population of 228 people.

It is the centre for the largest collection of prehistoric rock art in the world, including Quinkan Country which is on the Australian National Heritage List.

Aboriginal people have made their home in the Laura River valley for at least 50,000 years. In the wet season, they would camp under rock shelters on the high ground. This is where their rock art can be found.

Some of the earliest pastoral leases on Cape York Peninsula were taken up in the Laura district. However, the town of Laura did not develop until the discovery of gold on the Palmer River.

In 1873 gold was discovered on the Palmer River. Travellers coming from Cooktown to the Palmer Goldfields would cross the Laura River at Laura. This was a very violent period, as local aboriginal clans waged a war of resistance. A Native Mounted Police camp was established near the Lower Laura crossing to protect travellers.

During the gold boom a railway line was planned between Cooktown and the Palmer gold fields. By 1888 the line had been built to Laura.

An impressive bridge over the Laura River was opened, to great fanfare, in 1891. However, since the Palmer gold fields were in decline, a new Queensland government decided to abandon the project. Only one train ever crossed the bridge - the train that ran on the day that it opened.

The rail line contributed to the growth of Laura. It was used by miners and by peninsula cattle properties. The Cooktown to Laura Railway finally closed in 1961.

It was during the 1960s that Quinkan rock art galleries were reported by Percy Trezise, an airline pilot who surveyed the area from the air for likely sites and later walked in to rediscover them.

At the 2006 census, Laura and the surrounding area had a population of 225.

Laura State School opened in March 1889 and currently caters for students from Prep to Year six.

Laura has a number of heritage-listed sites, including:

There is no secondary school in Laura. The nearest secondary school is Cooktown State School (to Year 12) in neighbouring Cooktown to the east. However, only some parts of the locality are sufficiently close to enable students to commute to school in Cooktown; distance education and boarding schools would be alternatives.

All content from Kiddle encyclopedia articles (including the article images and facts) can be freely used under Attribution-ShareAlike license, unless stated otherwise. Cite this article:
Laura, Queensland Facts for Kids. Kiddle Encyclopedia.