Blackbutt is both a town and a locality in the South Burnett Region of Queensland, Australia. In the 2011 census, Blackbutt had a population of 1,055 people.

The town is located on the D'Aguilar Highway, in the South Burnett local government area, 166 kilometres (103 mi) north-west of the state capital, Brisbane. Blackbutt lies within the Cooyar Creek catchment, tributary of the Brisbane River, which rises in the Bunya Mountains to the west.

The timber industry played an important role in the development of the town.

The town is named after Eucalyptus pilularis, commonly known as blackbutt, a common tree of the family Myrtaceae native to south-eastern Australia which is one of Australia's most important hardwoods.

Blackbutt, Benarkin and the nearby town of Yarraman are often collectively referred to as the "Timber Towns" and the terms "Timbertown" and "Timbertowners" feature in the name of many local businesses and a sporting teams.

Blackbutt Provisional School opened on 20 January 1896 under teacher Rosa Bella Ryan. In 1909 it became Blackbutt State School. In January 1914, the school relocated to a larger site.

Blackbutt Post Office opened by November 1906 (a receiving office had been open from 1896).

When the Blackbutt railway station was built to serve the town, it was some distance from the town, so in 1910 it was decided to name the station Benarkin instead. This in turn gave its name to the new town that formed near the railway station Benarkin. Because of the close proximity (3.5 kilometres (2.2 mi) apart) and intertwined history of the two towns, they are often referred to as the twin towns of Blackbutt-Benarkin. Blackbutt was connected to the Brisbane Valley railway line in 1911. However, the line was closed in the 1980s and was converted into a rail trail 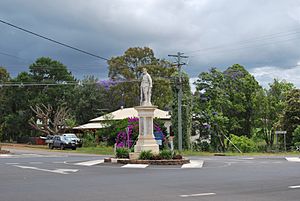 The Blackbutt War Memorial was unveiled on 24 April 1920 by J.A. Lee, the chairman of Nanango Shire.

Blackbutt is the site of the Queensland Government's first trial of using fibre composite in bridge building when it was used in the replacement of Taromeo Creek bridge in 2005. Fibre composite materials are much stronger than steel and concrete but also much lighter and do not rust.

The South Burnett Regional Council operates a library in Blackbutt.

The Brisbane Valley Rail Trail passes through Blackbutt, following the route of the former railway line. It is for walking cycling and horse riding; no motorised vehicles are permitted.

All content from Kiddle encyclopedia articles (including the article images and facts) can be freely used under Attribution-ShareAlike license, unless stated otherwise. Cite this article:
Blackbutt, Queensland Facts for Kids. Kiddle Encyclopedia.