Nanango is a town and locality in the South Burnett Region of Queensland, Australia. In the 2011 census, Nanango had a population of 3.795 people.

Nanango is situated 190 kilometres (118 mi) north-west of the state capital, Brisbane. Nanango sits at the junction of the D'Aguilar and Burnett Highways.

The original inhabitants of the area were the indigenous people belonging to the Wakka Wakka (or Waka Waka) people. The area was used as a gateway to the bunya nut festivals, where Aboriginal people would travel from far as far away as the Clarence River in northern New South Wales and the Maranoa River to feast on bunya nuts from the bunya trees.

The area around Nanango was first settled by Europeans in 1847 by John Borthwick and William Oliver from Ipswich taking up pastures for sheep farming. Oliver selected an area of more than 500 km² that comprised four blocks – Coolabunia, Booie, Broadwater and Nanango.

The first commercial establishment at the present site of Nanango township was Goode's Inn, founded by prospector Jacob Goode in July 1848. The inn served travellers journeying from Brisbane and Limestone (now known as Ipswich) and became the meeting place for early residents of Taromeo, Tarong and Nanango stations. The town of Nanango quickly developed around it. Goode's original rough slab structure met the licensing conditions as his first licence for the "Burnett Hotel situated at Barambah Creek" was given at a special licensing meeting on 26 April 1849.

Nanango claims to be the fourth oldest town in Queensland, but such claims depend on how the age of the town is determined. In some cases, this is by the first settlement (usually for pastoral purposes in or near the eventual town) or it is might be date of survey for a town plan. Nanango's claim to be fourth oldest is based on the first establishment of commercial premises (e.g. store or hotel), which is Goode's Inn in 1848. On this basis, it is the fourth following Ipswich (then called Limestone), Drayton, and Maryborough. However, Nanango was not surveyed for a town until 1861, and several other towns were surveyed before that.

The name Nanango has evolved from the Wakka Wakka word "Nunangi". There is dispute over the origins of the name Nanango- the word means "large watering hole" or but was also the name of a local aboriginal leader at the time of settlement. The original settlement was called "Noogoonida" by the aborigines, meaning "place where the waters gather together".

Beef, dairy and timber (in particular the valuable red cedar) were the primary early industries in the area. The discovery of gold at the Seven Mile Diggings near Nanango in 1867 precipitated a gold rush, and consequently a local population boom, however the gold deposits were found to be meagre. At one time the population included 700 miners, many of whom were Chinese. A second population boom occurred when the Brisbane Valley railway line was extended to Yarraman in 1911. Nanango became the terminus of a branch off the South Burnett railway line at Kingaroy on 13 November 1911. The 22.5 kilometres (14.0 mi) (14-mile) missing rail link between Nanango and Yarraman, although planned was never built. 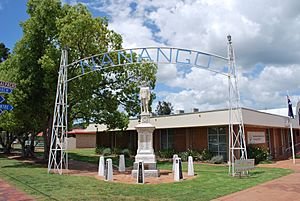 On 29 January 1920, the Nanango War Memorial was unveiled by the Major-General Thomas William Glasgow.

After World War I, however, growth levelled off until the early 1970s when the development of the Tarong Power Station led to a third population explosion. McCauley Weir was used as the town's water supply until three additional bores were drilled at the confluence of Barkers Creek and Meandu Creek.

Nanango has a number of heritage-listed sites, including:

The area has a similar climate to nearby Kingaroy, however it is described as cooler in winter and more humid.

Nanango also has a vigorous cultural and sporting life and is host to several potteries, Art Gallery and many craft outlets. The town also has many clubs and a range of sporting facilities including an RSL, bike, darts, golf, lawn bowling and archery clubs. There are 13 well-maintained parklands in the Shire which naturalists believe are home to 250 different bird species.

The South Burnett Regional Council operates a library in Nanango. It hosts events for children.

Located approximately 200 kilometres (120 mi) away from Brisbane, Nanango attracts day and weekend trippers from South East Queensland. Tourists also travel through the town on their way between Rockhampton in the north and Sydney/Melbourne in the south. The central business district features chainsaw sculptures and murals which reflect the town's historical connections with timber-felling, farming and mining.

A great deal of Nanango's colourful history is preserved in its buildings – especially Ringsfield House, a restored circa 1908 Queenslander developed by architect Robin Dods and now the headquarters of the Nanango Historical Society. Unfortunately a number of fires throughout history have ravaged the CBD of the town, especially the fire of 1940 which destroyed all of the shops on the southern side of Drayton Street from Fitzroy to Henry Street. This has led the CBD to have a "1950s feel" due to the architecture of the time. One building that escaped the ravages of fire was "Nobby's Corner", an example of an old-fashioned corner store with wide verandahs.

Nanango serves as a gateway for exploration of nearby towns. Day trips from the town include the Grapes and Gourmets Drive, Bunya Mountains, Coomba Falls and fossicking at Seven Mile Diggings. The "Great Bunya Drive" was created in 2006 and passes through the township and other regional attractions.

The Nanango Country Markets are featured on the 1st Saturday of every month and are widely recognised as the largest rural markets in SE Queensland. They have on average over 400 stalls, and reportedly in December 2013 had over 800 stalls.

Nanango has a range of accommodation for tourists, including caravan parks and motels.

Nanango has a number of live entertainment venues which regularly host performances by local theatre and musical groups. The Lee Park race track – not far south of the CBD – hosts around 8 meetings each year.

All content from Kiddle encyclopedia articles (including the article images and facts) can be freely used under Attribution-ShareAlike license, unless stated otherwise. Cite this article:
Nanango Facts for Kids. Kiddle Encyclopedia.