Parliament House is the meeting place of the Parliament of Australia, located in Canberra, the capital of Australia. The building was designed by Mitchell/Giurgola & Thorp Architects and built by a Concrete Constructions and John Holland joint venture. It was opened on 9 May 1988 by Elizabeth II, Queen of Australia. It cost more than A$1.1 billion to build.

Parliament House contains 4,700 rooms, and many areas are open to the public. The main foyer contains a marble staircase and leads to the Great Hall, which has a large tapestry on display. The House of Representatives chamber is decorated green, while the Senate chamber has a red colour scheme. Between the two chambers is the Members' Hall, which has a water feature and is not open to the public. The Ministerial Wing houses the Prime Minister's Office and other ministerial offices.

Before the establishment of Canberra 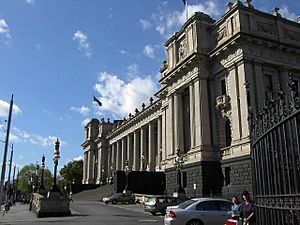 Parliament House, Melbourne, was home to Federal Parliament for 26 years from 1901 to 1927.

In 1901, when the six British colonies in Australia federated to form the Commonwealth of Australia, Melbourne and Sydney were the two largest cities in the country, but the long history of rivalry between them meant that neither could become the national capital. Section 125 of the Constitution of Australia therefore provided that:

Such territory shall contain an area of not less than one hundred square miles, and such portion thereof as shall consist of Crown lands shall be granted to the Commonwealth without any payment therefor. The Parliament shall sit at Melbourne until it meet at the seat of Government.

In 1909, after much argument, the Parliament decided that the new capital would be in the southern part of New South Wales, on the site which is now Canberra. The Commonwealth acquired control over the land in 1911, but World War I intervened, and nothing was done for some years to build the city. Federal Parliament did not leave Melbourne until 1927.

After World War I the Federal Capital Advisory Committee was established to prepare Canberra to be the seat of government, including the construction of a Parliament House. The committee decided that it would be best to erect a "provisional" building, to serve for a predicted 50 years until a new, "permanent" House could be built. In the end, Old Parliament House was Parliament's home for 61 years. In the last decade of its use as a parliament the building had a chronic shortage of available space. 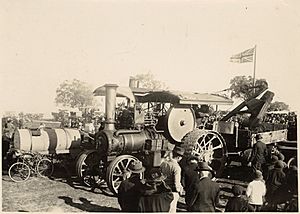 In 1978 the Fraser government decided to proceed with a new building on Capital Hill, and the Parliament House Construction Authority was created. A two-stage competition was announced, for which the Authority consulted the Royal Australian Institute of Architects and, together with the National Capital Development Commission, made available to competitors a brief and competition documents. The design competition drew 329 entries from 29 countries.

The competition winner was the Philadelphia-based architectural firm of Mitchell/Giurgola, with the on-site work directed by the Italian-born architect Romaldo Giurgola, with a design which involved burying most of the building under Capital Hill, and capping the edifice with an enormous spire topped by a large Australian flag. The facades, however, included deliberate imitation of some of the patterns of the Old Parliament House, so that there is a slight resemblance despite the massive difference of scale. 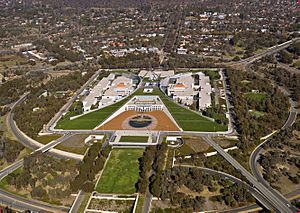 Giurgola placed an emphasis on the visual aesthetics of the building by using landscape architect Peter G. Rolland to direct civil engineers, a reversal of the traditional roles in Australia. Rolland played a pivotal role in the design, development and coordination of all surface elements including pool design, paving, conceptual lighting and artwork locations. Horticultural experts from the Australian National Botanic Gardens and a government nursery were consulted on plant selection. Permanent irrigation has been limited to only the more formal areas. Irwinconsult was commissioned to provide structural engineering, including quality assurance of all structural elements, to deliver a building with a designed life-span of 200 years.

Construction began in 1981, and the House was intended to be ready by Australia Day, 26 January 1988, the 200th anniversary of European settlement in Australia. It was expected to cost A$220 million. Neither the deadline nor the budget was met.

The flag flown from the 81 metres (266 feet) flagpole is 12.8 by 6.4 m (42 by 21 ft), about the size of half a tennis court. The flagpole weighs 250 tonnes and is made of polished stainless steel from Wollongong. It was designed to be the pinnacle of Parliament House and is an easily recognisable symbol of national government. It is visible by day from outside and inside Parliament House and floodlit at night. The flag itself weighs approximately 15 kg (33 lb).

The site covers 80 acres (32 hectares). The building was designed to sit above Old Parliament House when seen from a distance. The building is four metres (13 feet) higher than the original height of the hill. About one million cubic metres (35,000,000 cubic feet) of rock had to be excavated from the site. It was used to fill low-lying areas in the city. Most of the granite used was sourced from Australia. Twice the amount needed was quarried as a very high standard of granite was required particularly for the curved walls.

It was proposed originally to demolish Old Parliament House so that there would be an uninterrupted vista from the New Parliament House to Lake Burley Griffin and the Australian War Memorial, but there were successful representations for the preservation of the historic building, which now houses a parliamentary museum.

The original idea was for Parliament House to be open free to the public, and the sweeping lawns leading up to the entrances were intended to symbolise this. The building is a major visitor attraction in Canberra with about 1 million visits each year. With the increased risk of terrorist attacks in recent years, the security of Parliament House has been increased greatly. One result has been the construction of crash barriers blocking vehicular access to the lawns.

The front architecture built into Capital Hill, including the forecourt and main entrance, and illustrating a ground-level view of the boomerang-shaped design 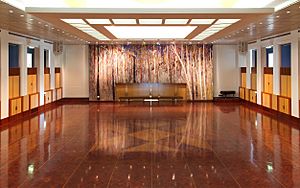 The Great Hall in Parliament House. The tapestry at the rear of the room is an enlarged version of an Arthur Boyd painting, and at 20 by 9 metres (66 ft × 30 ft) is one of the largest tapestries in the world.

The public entrance to Parliament House opens into the main foyer leading into the Great Hall, which features a tapestry based on a painting by Arthur Boyd, the original of which is also displayed in the building. Functions that have parliamentary and federal relevance often take place here, but the Great Hall is also open to functions for the general public, such as weddings, and the nearby University of Canberra hosts graduation ceremonies here.

Below the tapestry of the Great Hall is a removable division which opens on to the Members' Hall, which has a water feature at its centre. This is an area restricted to security-classified occupants of the building and special visitors. Directly ahead of the Members' Hall is the Ministerial Wing, housing the office suites of the Prime Minister and government Ministers. The Members' Hall has access to the House of Representatives and the Senate buildings to the left and right of the main entrance to the halls respectively. Public access to the visitors' galleries and the Main Committee Room is via an upper level reached by impressive marble staircases ascending from the entrance foyer. There are also 19 committee rooms which are open to the public and a highly secure Cabinet Room on the ground floor. 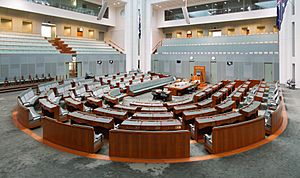 The House of Representatives

In commemoration of the colour scheme of the British House of Commons, the House of Representatives is decorated in green. However, the colour is muted to suggest the colour of eucalyptus leaves, or the Australian bush.

From the perspective of the image, the press gallery is ahead, with public galleries containing 388 seats to the left and right. Soundproofed galleries for school groups are directly above these, as no talking is permitted when the House members are present. 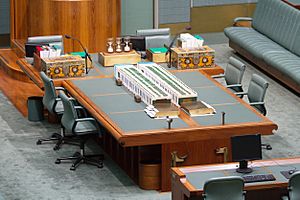 A part of the front bench, and the dispatch boxes

Frontbench (Cabinet) members approach the table with the ornate box (pictured), known as the despatch box, to speak. Backbenchers have a microphone on their desk and merely stand to speak (unless they cannot stand), in accordance with standing order 60.

Also on the table is a copy of Hansard and where the clerk and deputy clerk sit. The clerk needs to know all the rules of Parliament and is responsible for ringing the bells during a division (voting). In front of the clerk are the hour glasses. The outer glasses measure four minutes and the middle glass measures one minute. These glasses are turned when there is a division; one of the four-minute glasses is turned and the bells will ring and the clocks will flash green for the House of Representatives or red for the Senate for four minutes. After the hourglass stops, the house's attendants will lock the doors and the whips will count the votes. Members vote by either moving to the government side of the house for a vote for a bill or the opposition side for a vote against a bill. If there are successive divisions, and there is no debate after the first division, the middle one-minute hourglasses are turned and the bells are rung for one minute.

As is the custom with Westminster parliaments, members of the governing party sit to the Speaker's right, and the Opposition sits to the Speaker's left. Independents and minor parties sit on the cross-benches. The long benches (the front benches) closest to the despatch boxes are reserved for the Cabinet on the government's side and the Shadow Cabinet on the Opposition's side. 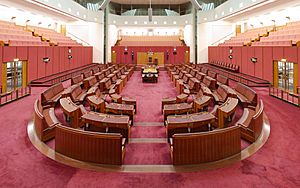 The Senate chamber matches the colour scheme of the House of Lords, decorated in red, but muted to tints of ochre, suggesting the earth and the colours of the outback.

The Parliament House Art Collection of over 6,000 works includes commissioned (and purchased) portraits of every prime minister, governor-general, president of the senate and speaker of the house, as well as other works of art significant to Australia.

In 2011, the Department of Parliamentary Services commissioned a pilot 43.3 kW photovoltaic system on the roof of Parliament House in Canberra. The system is split between two locations, with 192 panels installed on the Senate wing with the remaining 42 panels on the roof of the Gardeners' Compound. At the time of construction, the system was one of the largest installed for solar power in Australia.

According to the Department of Parliamentary Services, the system was switched on in June 2011 and has performed as expected by providing enough power for lighting in both the House of Representatives and the Senate. This equates to an approximate saving of $9,000 which is expected to rise to $17,000 annually.

The system received an award from the Clean Energy Council in 2012 for "Best design and installation of a grid-connect power system greater than 10 kW".

All content from Kiddle encyclopedia articles (including the article images and facts) can be freely used under Attribution-ShareAlike license, unless stated otherwise. Cite this article:
Parliament House, Canberra Facts for Kids. Kiddle Encyclopedia.