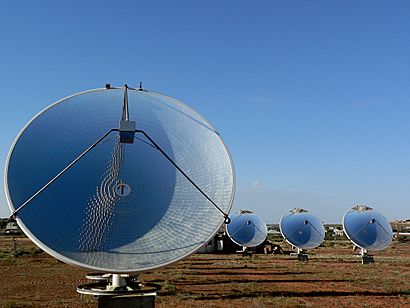 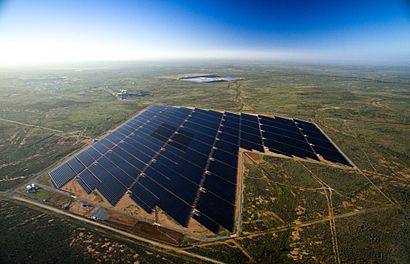 Solar power in Australia is a fast growing industry. As of September 2021, Australia's over 2.96 million solar PV installations had a combined capacity of 23,466 MW photovoltaic (PV) solar power, of which at least 4,117 MW were installed in the preceding 12 months. In 2019, 59 solar PV projects with a combined capacity of 2,881 MW were either under construction, constructed or due to start construction having reached financial closure. Solar accounted for 9.9% (or 22.5 TWh) of Australia's total electrical energy production in 2020.

The sudden rise in Solar PV installations in Australia since 2018 dramatically propelled the country from being considered a relative laggard to a strong leader in Solar PV development by mid 2019. With an installed photovoltaic capacity of 16.3 GW at the end of 2019, Australia has the highest per capita solar capacity at 600 watts per capita, overtaking Germany with 580 watts per capita.

The installed PV capacity in Australia increased 10-fold between 2009 and 2011, and quadrupled between 2011 and 2016. The first commercial-scale PV power plant, the 1 MW Uterne Solar Power Station, was opened in 2011. Greenough River Solar Farm opened in 2012 with a capacity of 10 MW. The price of photovoltaics has been decreasing, and in January 2013, was less than half the cost of using grid electricity in Australia. Using solar to supply all the energy needed would use less than 0.1% of land.

Over 90% of solar panels in Australia are made in China. 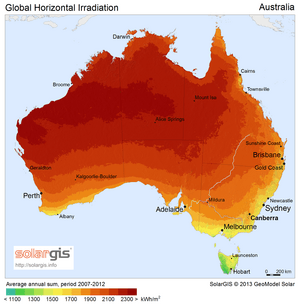 The combination of Australia's dry climate and latitude give it high benefits and potential for solar energy production. Most of the Australian continent receives in excess of 4 kWh per square metre per day of insolation during winter months, with a region in the north exceeding 6 kWh/day.

Australia's insolation greatly exceeds the average values in Europe, Russia, and most of North America. Comparable levels are found in desert areas of northern and southern Africa, south western United States and adjacent area of Mexico, and regions on the Pacific coast of South America. However, the areas of highest insolation are distant to Australia's population centres.

With an installed photovoltaic capacity of 5,440 megawatts by the end of 2016, Australia ranks among the world's top ten solar countries.

The Australian Government provided a rebate program that offered up to A$8,000 rebates for installing solar panels on homes and community use buildings (other than schools), through the Solar Homes and Communities Plan. However, on 8 June 2009, this program was phased out, to be replaced by the Solar Credits Program, where an installation of a solar system would receive 5 times as many Renewable Energy Certificates for the first 1.5 kilowatts of capacity under the Renewable Energy Target (see below)

Schools were eligible to apply for grants of up to A$50,000 to install 2 kW solar panels and other measures through the National Solar Schools Program beginning 1 July 2008, which replaced the Green Vouchers for Schools program. Applications for the program ended 21 November 2012. A total of 2,870 schools have installed solar panels. The output of each array can be viewed, and compared with that of up to four other schools.

A number of states have set up schemes to encourage the uptake of solar PV power generation involving households installing solar panels and selling excess electricity to electricity retailers to put into the electricity grid, widely called "feed-in". Each scheme involves the setting of feed in tariffs, which can be classified by a number of factors including the price paid, whether it is on a net or gross export basis, the length of time payments are guaranteed, the maximum size of installation allowed and the type of customer allowed to participate. Many Australian state feed-in tariffs were net export tariffs, whereas conservation groups argued for gross feed-in tariffs. In March 2009, the Australian Capital Territory (ACT) started a solar gross feed-in tariff. For systems up to 10 kW the payment was 50.05 cents per kWh. For systems from 10 kW to 30 kW the payment was 40.04 cents per kWh. The payment was revised downward once before an overall capacity cap was reached and the scheme closed. Payments are made quarterly based on energy generated and the payment rate is guaranteed for 20 years. In Germany, a guaranteed PV tariff means that Germany now has the highest PV capacity per capita – at 10 W for every person in Germany compared to Australia at 2.6 W per capita.

The MRET requires wholesale purchasers of electricity (such as electricity retailers or industrial operations) to purchase renewable energy certificates (RECs), created through the generation of electricity from renewable sources. These sources include wind, hydro, landfill gas and geothermal, as well as solar PV and solar thermal, providing a stimulus and additional revenue for these technologies.

The Solar Flagships program sets aside $1.6 billion for solar power over a period of six years. The government funding is for 4 new solar plants that produce coal plant scale power (in total up to 1000 MW - coal plants typically produce 500 to 2,000 MW). This subsidy would need additional funding from the plant builders and/or operators. As a comparison Abengoa Solar, a company currently constructing solar thermal plants, put the cost of a 300 MW plant at 1.2 billion euros in 2007. In 2009, the Arizona state government announced a 200 MW plant for 1 billion US dollars.

The list of solar power projects below is not complete as there are many more sites that have solar power or hybrid solar/wind systems to generate their own power needs. Projects with a power rating less than 30 kW are not listed.

A new 20 MWp solar power plant has been built on 50 hectares of land in Royalla, a rural part of the Australian Capital Territory south of Canberra. It is powered by 83,000 solar panels, and can power for 4,400 homes. It was officially opened on 3 September 2014. It is the first solar plant facility in the Australian capital, and at the time of building the largest such plant in Australia. The facility was built by a Spanish company, Fotowatio Renewable Ventures (FRV).

There are 30 solar concentrator dishes at three locations in the Northern Territory: Hermannsburg, Yuendumu and Lajamanu. Solar Systems and the Federal government were involved in the projects.

The solar concentrator dish power stations together generate 720 kW and 1,555,000 kWh per year, representing a saving of 420,000 litres of diesel and 1,550 tonnes of greenhouse gas emissions.

The project won a prestigious Engineering Excellence award in 2005.

The 100 MW PV Mildura Solar Concentrator Power Station, formerly expected to be completed in 2017, is now cancelled. It was expected to be the biggest and most efficient solar photovoltaic power station in the world. The power station was expected to concentrate the sun by 500 times onto the solar cells for ultra high power output. The Victorian power station would have generated electricity directly from the sun to meet the annual needs of over 45,000 homes with on-going zero greenhouse gas emissions.

Western Australia's largest solar power farm, the Greenough River Solar farm, is at Walkaway, 70 km SE of Geraldton. It was opened in October 2012. The 10MW field has 150,000 solar panels.

Solar Cities is a demonstration program designed to promote solar power, smart meters, and energy conservation in urban locations throughout Australia. One such location is Townsville, Queensland.

The Council of Sydney is attempting to make the city run 100% on renewable energy by 2030. This plan was announced earlier in 2014 with the blueprints made public on their website. This ambitious plan was recently awarded the 2014 Eurosolar prize in the category of "Towns/municipalities, council districts and public utilities".

All content from Kiddle encyclopedia articles (including the article images and facts) can be freely used under Attribution-ShareAlike license, unless stated otherwise. Cite this article:
Solar power in Australia Facts for Kids. Kiddle Encyclopedia.