Monarchy of Australia facts for kids 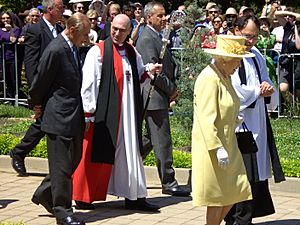 The Queen and Prince Philip attending an Anglican service in Canberra

The Monarchy of Australia is a form of government in which a hereditary monarch is the sovereign of Australia according to the rules of the Australian Constitution. 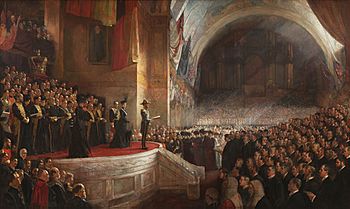 Opening of the first Parliament of Australia in 1901 by the Duke of Cornwall and York (later King George V).

The British First Fleet of convict ships arrived at Sydney in 1788 and New South Wales became a Crown Colony, with King George III of England as its King. The British set up other colonies all around Australia with powerful colonial governors chosen by Britain. From the 1820s, these colonies began to get more and more self-government and from the 1850s they began to become parliamentary democracies, which kept the Kings and Queens of the United Kingdom as their Heads of State, with royal duties done by Colonial Governors who had less and less real power.

In 1901, after a vote, the British colonies of Australia decided to become one country, with a constitutional monarchy with Queen Victoria as the monarch. The Duke of Cornwall and York (later King George V) opened the first Parliament of Australia in 1901 and the Duke and Duchess of York (later King George VI and Queen Elizabeth The Queen Mother) opened the first Parliament in Canberra in 1927.

The Balfour Declaration of 1926, changed the situation in the British Empire, so that United Kingdom and the Dominions (like Australia, Canada and New Zealand) were to be seen as equal and independent, but "united by a common allegiance to the Crown". This situation of independent monarchies was confirmed by the Statute of Westminster. The Curtin Labor Government chose Prince Henry, Duke of Gloucester (the brother of King George VI), as Governor-General during the Second World War.

In each of the States of Australia, the monarch is represented by a Governor. The Governors are appointed by the Queen after the state premiers tell her their choice.

Some Governor-Generals belonged to the Royal Family and for a long time they all came from Britain, but for many years all Governor Generals have been Australians.

All content from Kiddle encyclopedia articles (including the article images and facts) can be freely used under Attribution-ShareAlike license, unless stated otherwise. Cite this article:
Monarchy of Australia Facts for Kids. Kiddle Encyclopedia.