Declaration of war facts for kids 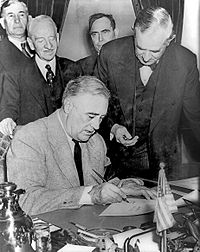 President Franklin D. Roosevelt signs a declaration of war against Germany on December 11, 1941.

A declaration of war is a formal declaration issued by a national government indicating that a state of war exists between that nation, and one or more others.

In an effort to force nations to resolve issues without warfare, the United Nations Charter attempted to commit member nations to using warfare only under limited circumstances, such as to defend when attacked. Wars continued to begin and end, but powerful states no longer declared them.

All content from Kiddle encyclopedia articles (including the article images and facts) can be freely used under Attribution-ShareAlike license, unless stated otherwise. Cite this article:
Declaration of war Facts for Kids. Kiddle Encyclopedia.