Curtin led Labor to victory (and majority government) at the 1943 election, which remains Labor's greatest victory in a federal election (both in the House of Representatives and the Senate).

As the Member for Fremantle, Curtin was the first and to date the only prime minister to represent an electorate outside the Eastern states.

Curtin successfully led Australia through the period when the nation was directly threatened by the Japanese advance in World War II, and is today widely regarded as one of the country's greatest prime ministers. With the end of the war in sight, Curtin died in office on 5 July 1945 and was succeeded briefly by Frank Forde and then by Ben Chifley. 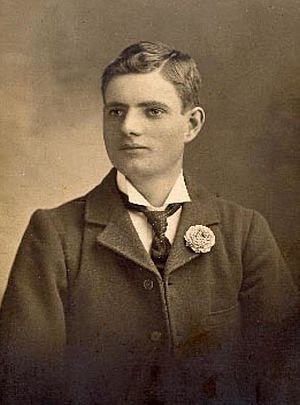 In early 1899, Curtin began working as an office boy at a weekly magazine called The Rambler, earning five shillings per week. His employer was the artist and writer Norman Lindsay, who had also grown up in Creswick and knew his family. The magazine did not last long, and over the following years Curtin held down a series of short-term jobs, including as a copy boy at The Age, a potter's apprentice, and a houseboy at a gentlemen's club. He did not secure a permanent job until he was 18, taking up a position as an estimates clerk with the Titan Manufacturing Company in South Melbourne in September 1903. By that time he was the family's primary breadwinner, as his father was a virtual invalid.

As a youth, Curtin was a talented sportsman. Between 1903 and 1907, he played as a half-forward flanker for the Brunswick Football Club in the semi-professional Victorian Football Association (VFA). His teammates gave him the nickname "Bumble". His nephew Claude played for Fitzroy in the Victorian Football League (VFL). Curtin also played cricket for the Brunswick Cricket Club, where he had a reputation as a solid batsman. He remained involved in both sports throughout the remainder of his life, as an administrator and supporter. He was said to have an encyclopedic knowledge of cricket statistics.

From a young age, Curtin was active in both the Australian Labor Party and the Victorian Socialist Party. From 1911 until 1915, Curtin was employed as Secretary of the Timberworkers' Union. He also at this time stood as the Labor candidate for Balaclava in 1914. In 1917, he married Elsie Needham, the sister of Labor Senator Ted Needham.

Curtin moved to Cottesloe near Perth in 1917 to become an editor for the Westralian Worker, the official trade union newspaper. He enjoyed the less pressured life of Western Australia. He joined the Australian Journalists' Association in 1917 and was elected Western Australian President in 1920. He wore his AJA badge (WA membership #56) every day he was prime minister. In addition to his stance on labour rights, Curtin was also a strong advocate for the rights of women and children. 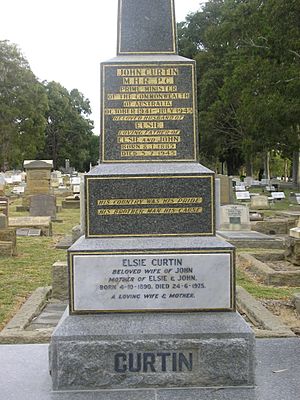 By 1944, a time when he was regularly travelling to and from London and Washington for meetings with Churchill, Roosevelt and other Allied leaders, Curtin had already developed heart disease. In early 1945, with the end of the war in sight, his health began to seriously deteriorate at a more rapid pace.

On 5 July 1945, Curtin died at The Lodge at the age of 60. He was the second Australian prime minister to die in office within six years. His body was returned to Perth on a RAAF Dakota escorted by a flight of nine fighter aircraft. After lying in state, he was buried at Karrakatta Cemetery in Perth; the service was attended by over 30,000 at the cemetery with many more lining the streets. MacArthur said of Curtin that "the preservation of Australia from invasion will be his immemorial monument". 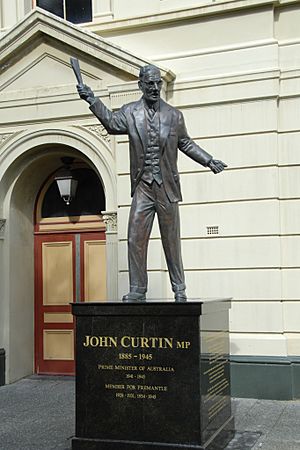 Curtin is credited with leading the Australian Labor Party to its best federal election success in history, with a record 55.1 percent of the primary half-senate vote, winning all seats, and a two party preferred lower house estimate of 58.2 percent at the 1943 election, winning two-thirds of seats.

One important legacy of Curtin's was the significant expansion of social services under his leadership. In 1942, uniform taxation was imposed on the various states, which enabled the Curtin Government to set up a far-reaching, federally administered range of social services. These included a widows' pension (1942), maternity benefits for Indigenous Australians (1942), funeral benefits (1943), a second form of maternity benefit (1943), a wife's allowance (1943), additional allowances for the children of pensioners (1943), unemployment, sickness and Special Benefits (1945), and pharmaceutical benefits (1945). Substantial improvements to pensions were made, with invalidity and old-age pensions increased, the qualifying period of residence for age pensions halved, and the means test liberalised. Other social security benefits were significantly increased, while child endowment was liberalised, a scheme of vocational training for invalid pensioners was set up, and pensions extended to cover Aborigines. The expansion of social security under John Curtin was of such significance that, as summed up by one historian,

"Australia entered World War II with only a fragmentary welfare provision: by the end of the war it had constructed a 'welfare state'".

Prime Minister John Curtin reinforced the White Australia policy in a speech in which he stated: "This country shall remain forever the home of the descendants of those people who came here in peace in order to establish in the South Seas an outpost of the British race." 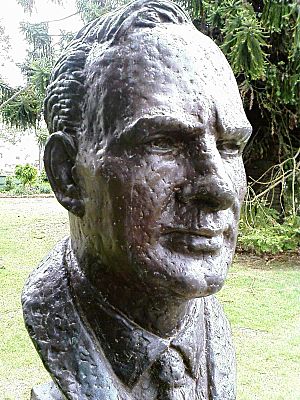 The Curtin government's enactment of the Statute of Westminster Adoption Act 1942, reversing the stance of four previous governments, marked the moment of Australia's legal independence. This law, along with the Constitution of Australia and the Australia Act 1986, is one of the key components of Australia's modern constitutional framework.

His early death and the sentiments it aroused have given Curtin a unique place in Australian political history. Successive Labor leaders, particularly Bob Hawke and Kim Beazley, have sought to build on the Curtin tradition of "patriotic Laborism". Even some political conservatives pay at least formal homage to the Curtin legend. Immediately after his death the parliament agreed to pay John Curtin's wife Elsie a £1,000 per annum pension until legislation was passed and enacted to pay a pension to a past prime minister or their widow after their death.

Curtin is commemorated by the federal seat of Curtin, the Canberra suburb of Curtin, Curtin University in Perth, John Curtin College of the Arts in Fremantle, the John Curtin School of Medical Research in Canberra, the John Curtin Prime Ministerial Library, Curtin Springs in the Northern Territory, John Curtin House, the former headquarters of the Australian Labor Party, Curtin House in Swanston St, Melbourne, and many other buildings, roads, parks and structures throughout Australia.

In 1975 Curtin was honoured on a postage stamp bearing his portrait issued by Australia Post.

On 14 August 2005, the 60th anniversary of V-P Day, a bronze statue of Curtin in front of Fremantle Town Hall was unveiled by Premier of Western Australia Geoff Gallop.

In the strategy game Civilization VI, John Curtin is the leader of the Australian civilization.

All content from Kiddle encyclopedia articles (including the article images and facts) can be freely used under Attribution-ShareAlike license, unless stated otherwise. Cite this article:
John Curtin Facts for Kids. Kiddle Encyclopedia.