James Henry "Jim" Scullin (18 September 1876 – 28 January 1953) was an Australian Labor Party politician and the ninth Prime Minister of Australia. Scullin led Labor to government at the 1929 election. The Wall Street Crash of 1929 transpired just two days after his swearing in, which would herald the beginning of the Great Depression in Australia. Scullin's administration would soon be overwhelmed by the economic crisis, causing a three-way split of his party that would bring down the government in late 1931. Scullin remained a leading figure in the Labor movement throughout his lifetime, and served in various capacities for the party until his retirement in 1949. 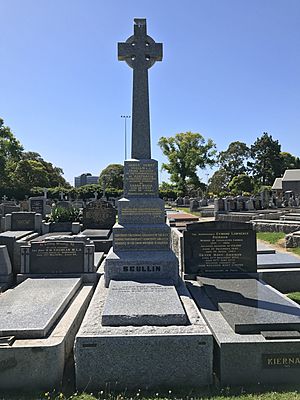 Grave of James and Sarah Scullin at Melbourne General Cemetery

Scullin died in his sleep on 28 January 1953 in Hawthorn, Melbourne. He was given a state funeral in St Patrick's Cathedral, Melbourne and was buried in the Catholic section of Melbourne General Cemetery. Over his grave the federal Labor executive and the ACTU erected a monument on behalf of the Labor movement of Australia.

Scullin, Australian Capital Territory, a suburb of Canberra, is named after him, as is the Division of Scullin, a House of Representatives electorate. The Scullin monolith in Antarctica was also named in his honour.

All content from Kiddle encyclopedia articles (including the article images and facts) can be freely used under Attribution-ShareAlike license, unless stated otherwise. Cite this article:
James Scullin Facts for Kids. Kiddle Encyclopedia.