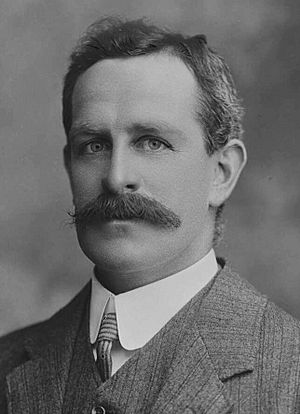 Tudor was born in Williamstown of Melbourne, Victoria. He was the son of Welsh parents. His first wife, Alice Smale, died in 1894. He married in Fanny Mead in 1897. He had six children, three sons and three daughters. Tudor died of heart disease at his Richmond, Victoria home, at the age of 55.

All content from Kiddle encyclopedia articles (including the article images and facts) can be freely used under Attribution-ShareAlike license, unless stated otherwise. Cite this article:
Frank Tudor Facts for Kids. Kiddle Encyclopedia.