Kids Encyclopedia Facts
"Cottesloe" redirects here. For other uses, see Cottesloe (disambiguation).
This page is about a suburb of Perth, Western Australia. For the local government area, see Town of Cottesloe.

Cottesloe was home to Australian Prime Minister John Curtin. The house he built still stands in Jarrad Street. It is now vested jointly in the National Trust of Australia (WA) and Curtin University.

Cottesloe is a beach-side suburb of the city of Perth in Western Australia. It is located roughly halfway between Perth central business district and the port of Fremantle. It is famous for its beaches, cafes and relaxed lifestyle.

Cottesloe is bounded by the Vlamingh Memorial to the south, Stirling Highway, Congdon Street and West Coast Highway to the east; North Street to the north and the Indian Ocean to the west. A large part of Cottesloe is residential, although a significant shopping area is located along Stirling Highway, and a 9-hole golf course is on Jarrad Street.

At the ABS 2011 census, Cottesloe had a population of 7,398 people living in 2,686 dwellings, 69.5% of which are detached houses on separate lots. In a 2014 estimate there were 8,703 people living in 2,780 dwellings. The ABS identified property and business services and health as the two main occupations.

Historically the beach and its panorama are reflections of the changes in the last 110 years of Perth's history. The photos and paintings of Cottesloe Beach that are either in collections or published, give tangible evidence of the importance of beach-oriented activities in the Perth community. Cottesloe Beach is a popular place for beach cricket. An oceanway allows pedestrians and cyclists to move along the beaches in a sustainable manner.

Cottesloe is served by Swanbourne, Grant Street, Cottesloe, Mosman Park and Victoria Street railway stations on the Fremantle line. Various bus routes along Stirling Highway and through the suburb's western and eastern sections link Cottesloe to Perth and Fremantle. All services are operated by the Public Transport Authority. During the summer months, the council provides a free shuttle bus every hour during the day, called the Cott Cat, between Cottesloe train station and the Cottesloe beachfront. In 2004 the service carried over 30,000 passengers, at a cost of $15,000 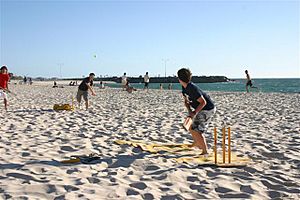 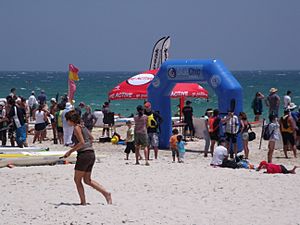 Kayaking competition at Cottesloe beach on a Western Australian Sunday 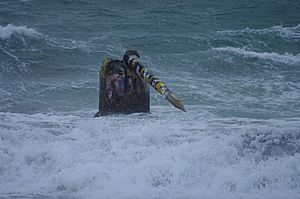 The Pylon after storm damage in May 2009

In December 2008 the Town voted to restore the pylon, a concrete structure built in 1935, at a cost of $172,000. Decades of battering by the ocean has eroded the pylon, which was one of three pylons built to anchor a shark net following a fatal attack in 1925. Two were destroyed by storms in 1937. Since then it has become an iconic landmark and popular diving platform for beach users.

During major storm activity on 21–22 May 2009, the spike was knocked off the pylon. However this is not the first time this has occurred: during storms in 1995, the spike was also knocked over. It then remained on the bottom of the ocean in approximately 3 metres of water until an unnamed group removed the 800 kilograms (1,764 lb) structure using nothing but wood and rope.

After the pylon was restored, it was painted in the Cottesloe Surf Lifesaving Club colours, but it was soon changed to the colours of North Cottesloe Lifesaving Club. It has alternated colours many times since.

All content from Kiddle encyclopedia articles (including the article images and facts) can be freely used under Attribution-ShareAlike license, unless stated otherwise. Cite this article:
Cottesloe, Western Australia Facts for Kids. Kiddle Encyclopedia.