Kids Encyclopedia Facts
This page is about a suburb of Perth, Western Australia.. For the local government area, see Town of Claremont. 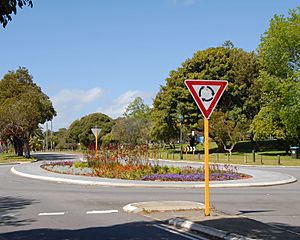 Claremont is a western suburb of Perth, Western Australia on the north bank of the Swan River.

Prior to European settlement, the Noongar people used the area as a source of water, for fishing and for catching waterfowl.

In 1830, John Butler, a settler, set up an inn at Freshwater Bay (in modern-day Peppermint Grove) to attract travellers on the road from Perth to Fremantle. A wetland became known as Butler's Swamp (later Lake Claremont). After the arrival of convicts in the colony in 1850, work began on constructing the Fremantle Road. The government allocated land on the foreshore and at Butler's Swamp to 19 pensioner guards and their families, and a permanent convict depot operated at Freshwater Bay (until 1875).

A state school (1862) and church were built, and a community grew around what is now Victoria Avenue. A settler named James Morrison acquired a property at Swan Location 702, and named it Claremont Estate, after his wife, Clara (née de Burgh). During the 1870s, a number of prominent families, including the Triggs, Sandovers and Stirlings, acquired land in the district, around the later site of Christ Church Grammar School; some of their homes were later bought and used by the school.

In 1881, the railway line from Perth to Fremantle was built, along with a station at Butler's Swamp; the name of the station was changed to Claremont in 1883. The focus of the community shifted to the area between the railway line, Fremantle Road (Stirling Highway) and Bay View Terrace. The Freshwater Bay school ceased to play a central role; it became a boarding house nicknamed "Appy One" in 1892 (and in 1975 a museum).

Land speculators bought in the area and subdivided blocks at varying sizes, leading to a wide class diversity within the suburb. By about 1903, the entire suburb, other than a dozen or so streets, had been subdivided, and by the Second World War, the community was firmly established.

Claremont has grand homes in the Agett Road and Richardson Avenue areas on the south side of Stirling Highway, while lesser areas include the areas around Ashton Avenue to the north.

At the ABS 2011 census, Claremont had a population of 7,594 people living in 3,797 dwellings, almost half of which were flats or townhouses. The ABS identified property and health as the two main occupations.

Claremont includes the Claremont Showgrounds and the Claremont Oval, home ground of the Claremont Football Club, as well as a significant shopping area along Stirling Highway, most concentrated on the St Quentins Avenue precinct. The suburb also contains several nightspots including Claremont Hotel, On the Terrace and Club Bay View.

The Perth Royal Show, an annual agricultural show, is held at the Claremont Showgrounds. The Showgrounds also hosts a number large music events and festivals, including The Big Day Out.

Claremont is served by the Claremont railway station and Loch Street railway station at regular times, as well as the Showgrounds railway station during special events. Various buses, including the CircleRoute, travel along Stirling Highway and through Claremont's northern and southern sections. All services are operated by the Public Transport Authority.

All content from Kiddle encyclopedia articles (including the article images and facts) can be freely used under Attribution-ShareAlike license, unless stated otherwise. Cite this article:
Claremont, Western Australia Facts for Kids. Kiddle Encyclopedia.