Kids Encyclopedia Facts
This page is about a suburb of Perth, Western Australia. For the local government area, see City of Nedlands. 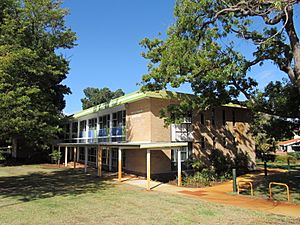 Nedlands is a western suburb of Perth, Western Australia in the local government area of the City of Nedlands. It is about 7 kilometres (4 mi) from the Perth CBD via either Thomas Street or Mounts Bay Road.

Nedlands is a mixed-character suburb: it contains low-cost housing for students at the neighbouring University of Western Australia; wealthy homes and a golf course (Nedlands Golf Club) in the southern half of the suburb; a commercial area (located next to the Captain Stirling Hotel), restaurants and a small cinema (Windsor Cinema) along both sides of Stirling Highway; the Lions Eye Institute, a major centre of research into eye disease, and Sir Charles Gairdner Hospital, one of Perth's major public hospitals, and Hollywood Private Hospital (the former Repatriation General Hospital) and its neighbouring aged care facilities. The hospital and Stirling Highway are well served by the CircleRoute and other bus routes. Nedlands also contains some grocery shops, a library, and is a very livable suburb of Perth. It will soon also contain the Perth Children's Hospital, (the replacement for the Princes Margaret Hospital), adjoining the Sir Charles Gairdner Hospital, as part of the Queen Elizabeth II Medical Centre complex.

Nedlands is served by the CircleRoute and other services along Stirling Highway, Hampden Road, Broadway and Princess Road. All services are operated by Swan Transit.

All content from Kiddle encyclopedia articles (including the article images and facts) can be freely used under Attribution-ShareAlike license, unless stated otherwise. Cite this article:
Nedlands, Western Australia Facts for Kids. Kiddle Encyclopedia.