Swanbourne is a western coastal suburb of Perth, Western Australia, and is an affluent, upper middle class locale with older Federation style homes, many being renovated. The suburb was established in the late 19th century. New housing estates have been built recently through the redevelopment of areas such as the Swanbourne Senior High School, Swanbourne Primary School and Lakeway Drive-In Cinema sites. 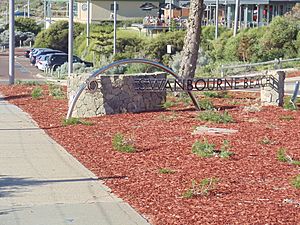 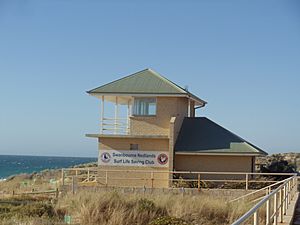 Swanbourne was named for Swanbourne House, in Swanbourne, Buckinghamshire, the family seat of Sir Thomas Fremantle (later Baron Cottesloe), a prominent Tory politician, and his brother, Admiral Sir Charles Fremantle, for whom the city of Fremantle was named.

Swanbourne is bounded by the Swanbourne Rifle Range and Cottesloe Golf Club to the north, Lake Claremont and Stirling Road to the east, the Fremantle railway line and North Street to the south, and the Indian Ocean to the west.

At the ABS 2011 census, Swanbourne had a population of 3,508 people living in 1,402 dwellings, all private dwellings and nearly all detached houses on separate lots. The ABS identified property and business services, health, and education as the three main occupations for people employed in businesses or enterprises located within the suburb. The census does not identify Swanbourne's largest employer, the Australian Army. Swanbourne is a high income suburb with a median family income of $2757, compared to $1722 for Western Australia and $1481 for Australia.

Swanbourne has a Mediterranean climate (Köppen climate classification Csa) like much of southwestern Western Australia including Perth.

Swanbourne includes the 18-hole Cottesloe Golf Club and Swanbourne Beach. Allen Park contains a number of sporting facilities, including tennis courts, a football/cricket pitch and a rugby pitch. Also at Allen Park is the relocated Tom Collins House. Tom Collins was a noted Australian author. A veterinary practice in Devon road was originally started by Thomas William Hogarth. Scotch College, a major independent school for boys, is the suburb's largest employer after the Army.

The Australian Special Air Service Regiment is based at Campbell Barracks within the suburb, which occupies the coastline north of Cottesloe and south of City Beach.

Swanbourne is served by Swanbourne railway station and by various bus routes that pass through Swanbourne. All services are operated by the Public Transport Authority.

All content from Kiddle encyclopedia articles (including the article images and facts) can be freely used under Attribution-ShareAlike license, unless stated otherwise. Cite this article:
Swanbourne, Western Australia Facts for Kids. Kiddle Encyclopedia.