Kids Encyclopedia Facts
This page is about a suburb of Perth, Western Australia. For the local government area, see Shire of Peppermint Grove.

Peppermint Grove is an affluent western suburb of Perth, Western Australia on the north bank of the Swan River at Freshwater Bay. Its local government area, the smallest in the country, is the Shire of Peppermint Grove. The suburb was named after its trademark Swan River peppermint trees (Agonis flexuosa) lining many streets. The suburb has long been associated with Western Australia's wealthiest and oldest families. Their prosperity is reflected in the many historical houses in the area, such as The Cliffe and the Federation Queen Anne style St Just. Colin Barnett, a former Premier of Western Australia, dubbed the suburb "Monaco of WA" due to its small size and concentration of wealth.

At the time of European settlement and for some years after, the area was thickly wooded with tuart, jarrah, red gum, banksia as well as the peppermint trees which gave the suburb its name.

In 1830, John Butler, an innkeeper, was given a grant of 250 acres (1 km²) on Freshwater Bay, after unsuccessfully attempting to secure land at Claremont. From this location, he operated "The Bush Inn", a stone house he had built and rigged out with native mahogany, commonly known as jarrah. After a series of arguments with the colonial authorities of the day, Butler left for Sydney in October 1835, but did not dispose of the property.

After the death of Butler's wife, Ann, in 1886, a syndicate of businessmen, including Alexander Forrest and George Leake, persuaded Butler's children to sell the land. In 1891, it was subdivided and lots were sold for £7 to £12 each. Two of the earliest residents were Edward Keane, Lord Mayor of Perth, and John Forrest, Premier of Western Australia. Just four years later, residents got a road board, later to become the Peppermint Grove Shire Council - to this day, the smallest in Australia at just 1.1 km².

Peppermint Grove is situated between Stirling Highway on the west and the Swan River at Freshwater Bay to the east. It spans six blocks, with its main streets named after the first post-subdivision residents of the suburb - McNeil, Forrest, Leake, Irvine, Keane, Johnston and Venn.

At the ABS 2011 census, Peppermint Grove had a high-income, mostly white population of 1,529 people living in 581 dwellings. The ABS noted that 69% of the suburb's workforce were managers or professionals. 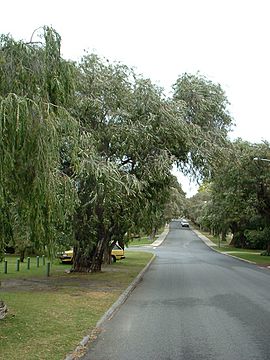 Cottesloe Primary School and Presbyterian Ladies' College are located within the suburb, as is the council office and the Grove Library on Stirling Highway, a small shopping centre opposite the Cottesloe shopping area, and reserves along the riverfront, most notably Manners Hill Park and Keanes Point Reserve, which offer recreational facilities and jetties.

The suburb is serviced by Fremantle to Perth bus services and the CircleRoute bus route along Stirling Highway, and by Cottesloe and Mosman Park railway stations on the Fremantle line. All services are operated by the Public Transport Authority.

All content from Kiddle encyclopedia articles (including the article images and facts) can be freely used under Attribution-ShareAlike license, unless stated otherwise. Cite this article:
Peppermint Grove, Western Australia Facts for Kids. Kiddle Encyclopedia.