His grandfather William Hindmarsh was a gardener in Coniscliffe, County Durham.

His father, John Hindmarsh, was born on 27 June 1753 and baptised at St Cuthbert's Church, Darlington. He was pressed into the Royal Navy, and eventually became a warrant officer of the Bellerophon. On 23 August 1784 Hindmarsh (senior) married Mrs Mary Roxburgh, a widow, at St George's-in-the East, Middlesex. At the time of the Battle of the Nile, Hindmarsh (senior) was the gunner of the Bellerophon, (This was a warrant officer position.)

Hindmarsh was John and Mary Hindmarsh's eldest son, and was baptised on 25 May 1785 at St Mary's Church, Chatham, Kent. 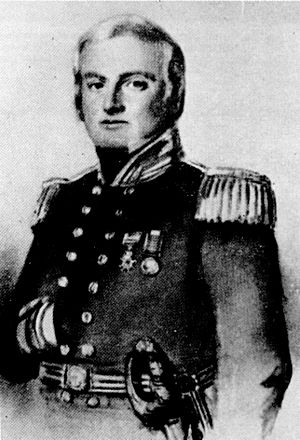 He was promoted to First Class Volunteer, when he was nine, for his actions at the Battle of the Glorious First of June.

During the Battle of the Nile on 1 August 1798, the fire on board the French line-of-battle ship l'Orient put the Bellerophon (1786) in danger; all the other officers on the quarterdeck on the Bellerophon were killed or wounded, so 13-year-old Midshipman Hindmarsh gathered some of the crew, cut the anchor cables, and raised a spritsail to get the ship moving. Captain Darby then came on deck from having his wounds dressed. Nelson knew of this incident and referred to it five years later when he gave Hindmarsh his promotion to lieutenant on 1 August 1803 on board the Victory. Hindmarsh suffered a contusion during the Battle of the Nile that resulted in him later losing an eye.

Hindmarsh transferred to the Spencer in May 1800, and took part in the Battle of Algeciras Bay in 1801. He served on HMS Phoebe at the Battle of Trafalgar, and was first lieutenant of the sloop Beagle, which took a conspicuous part in the Battle of the Basque Roads in 1809, and on the same sloop in the Walcheren expedition later in the year. He served in the Nisus in the invasion of Java in 1811. He was promoted to commander on 15 June 1814. A lengthy period of inaction on half-pay followed, but from March 1830 to December 1831 he commanded the Scylla, and was promoted to captain on 3 September 1831.

William Light captained the paddle steamer the Nile from London to Alexandria to join the Egyptian Navy in 1834, reaching Alexandria in September. Hindmarsh, who had prepared the steamer for delivery at Blackwall Yard on the River Thames, travelled as a passenger on the ship on its journey to Alexandria, and was made captain of the ship by November.

When the Naval General Service Medal, designed by William Wyon, was introduced in 1847, it was discovered that only two people were entitled to the medal with seven clasps (one clasp for each battle the recipient took part in): Sir John Hindmarsh and Admiral of the Fleet Sir James Alexander Gordon. The seven clasps on Hindmarsh's medal were for Java, Basque Roads 1809, Trafalgar, Gut of Gibraltar 12 July 1801 (the Second Battle of Algeciras), Nile, 17 June 1795 (known as Cornwallis's Retreat) and 1 June 1794 (the "Glorious First of June"). He was listed to be awarded a good service pension of £150 under the 1850-51 Navy Estimates. He was promoted to rear admiral on the retired list in 1856.

"Bluff Jack Hindmarsh", as he came to be known, arrived in Holdfast Bay on 28 December 1836, in the Buffalo. Prior to this, earlier arrivals included the Survey Brig Rapid, Cygnet (carrying Colonel William Light's surveyors), Africaine, and Tam O'Shanter. Initially they landed on Kangaroo Island, and sent out the team of surveyors led by Light to find a suitable place for the capital city of the new colony. Hindmarsh wanted it at Port Lincoln, instead of at the present site which had been selected by Light.

Light eventually chose the site of Adelaide, and stationed the Cygnet at Port Lincoln to notify Hindmarsh that the capital would be located on the east Coast of Gulf St Vincent near Holdfast Bay, now known as Glenelg, South Australia (named after Lord Glenelg, the then Colonial Secretary). (Through Lord Glenelg the name derives from Glenelg, Highland (previously Inverness-shire), Scotland.) The name Adelaide was chosen by King William IV in honour of his consort Queen Adelaide. Hindmarsh's proclamation on 28 December 1836 announced the commencement of colonial government and stated that Aborigines were to be treated justly and were 'equally entitled to the privileges of British subjects'. Although most South Australians have been taught that Hindmarsh's proclamation created the colony, it did not. William IV, having been empowered by an Act of Parliament in August 1834, in February 1836 Letters Patent 'Erected and Established' the Province of South Australia. No governor had the power to create colonies.

There was some question as to the respective powers of the Governor and the Resident Commissioner, James Hurtle Fisher, and the two came into open conflict. Feeling ran high and when Hindmarsh went so far as to suspend Robert Gouger and other public officers, the commissioners brought the matter before the Secretary of State for the Colonies. Hindmarsh was then recalled to London in 1838. In 1840 he was made Lieutenant-Governor of Heligoland, where he served until 7 March 1857. Hindmarsh was knighted by Queen Victoria on 7 August 1851, and retired in 1857 to the seaside town of Hove, England.

In announcing to the Colonists of His Majesty's Province of South Australia the establishment of the Government, I hearby call upon them to conduct themselves at all times with order and quietness, duly to respect the laws, and by a course of industry and sobriety, by the practice of sound morality, and a strict observance of the ordinances of religion, to prove themselves to be worthy to be the Founders of a great and free Colony. It is also, at this time especially, my duty to apprise the Colonists of my resolution to take every lawful means for extending the same protection to the native population as to the rest of His Majesty's subjects, and of my firm determination to punish with exemplary severity all acts of violence and injustice which may in any manner be practised or attempted against the natives, who are to be considered to be as much under the safeguard of the law as the Colonists themselves, and equally entitled to the privileges of British subjects. I trust therefore, with confidence to the exercise of moderation and forbearance by all classes in their intercourse with the native inhabitants, and that they will omit no opportunity of assisting me to fulfill His Majesty's gracious and benevolent intentions towards them by promoting their advancement in civilisation, and ultimately, under the blessing of Divine Providence, their conversion to the Christian Faith.

Hindmarsh lived at 30 Albany Villas in Hove for a number of years, where there is now a blue plaque in his honour. Rear-Admiral Sir John Hindmarsh died in London on 29 July 1860 and is buried in the grounds of St Andrew's Church, Hove.

All content from Kiddle encyclopedia articles (including the article images and facts) can be freely used under Attribution-ShareAlike license, unless stated otherwise. Cite this article:
John Hindmarsh Facts for Kids. Kiddle Encyclopedia.