Hindmarsh Island (Aboriginal: Kumerangk) is an island in the lower Murray River near the town of Goolwa, South Australia. It is a popular tourist destination, which has increased in popularity since the Hindmarsh Island bridge was opened in 2001. Hindmarsh Island is 100.1 kilometres (62.2 mi)* south east of the Adelaide city centre, around a 1-hour and 30 minute drive. 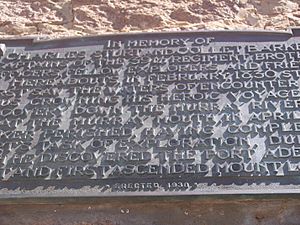 Plaque of a monument dedicated to Sturt and Barker on the island, erected in 1930.

1830: The first European to set foot on Hindmarsh Island was Captain Charles Sturt. Sturt used the Island as a viewing point and from there he sighted the Murray Mouth.

1831: Captain Collet Barker surveyed the Murray Mouth but was killed by Indigenous Australians after swimming across the mouth. 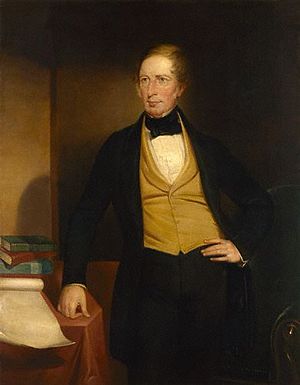 1849: Dr. John Rankine was granted an occupational licence to become the island's first grazier. His nephew James Rankine was an early and longtime settler.

1857: A signal mast was erected at Barker Knoll to convey safe passage condition messages to vessels wishing to pass through the mouth.

1858: A public ferry began operations between Goolwa and the island. In the same year the first inter colonial telegraph line passed through the island to link Adelaide with Melbourne.

1868: Hereford cattle and Shropshire sheep arrived in South Australia, when Charles Price introduced them onto the island.

1900: A cheese factory was established by Percy Heggaton.

1914: An experimental barrage was constructed to link Hindmarsh Island with Mundoo Island.

1935: Construction of the permanent barrages took place with the aim of maintaining a consistent water level around the river Port of Goolwa and keeping salt water from the northern shore improving agricultural opportunities.

1965: Mains electricity arrived on the island

1970: Little penguins were present on Hindmarsh Island. Today, the colony is extinct.

1985: Approximately an area of 1,405 square kilometres (542 sq mi)* including the island was listed as a "wetland of international importance" under the Ramsar convention under the name of Coorong and Lakes Alexandrina and Albert Wetland.

2001: Approximately a third of the island, the 10.81 square kilometres (4.17 sq mi)* Wyndgate property, was added to the Coorong National Park.

2005: Hindmarsh Island Marina boasts the title of the largest freshwater marina in the Southern Hemisphere.

Present: Hindmarsh Island today has fresh water on its northern shore and salt water on the southern shores, the waters being separated by a series of barrages. 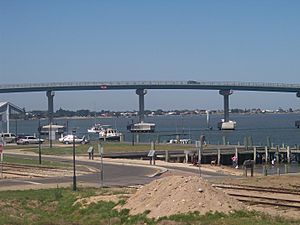 View of the Hindmarsh Island Bridge from the Goolwa wharf.

March 4, 2001 saw the official opening of the Hindmarsh Island Bridge linking the island to Goolwa. The bridge became a focus of national controversy when a group of local Indigenous people (the Ngarrindjeri) and some landowners objected to its construction. It was alleged that the Ngarrindjeri objectors fabricated the cultural significance of the island (the Secret Women's Business) in order to help fight the development.

A later Royal Commission decided that the Secret Women's Business was made up. Construction was blocked by the Keating Government but given the go-ahead by the Howard Government in 1996.

Five years after the Royal Commission findings, the Ngarrindjeri who had stated the bridge desecrated sites sacred to women were vindicated. Federal Court Judge, Mr Justice John von Doussa, in Chapman v Luminis Pty Ltd (No 5) found that "the evidence received by the Court on this topic is significantly different to that which was before the Royal Commission. Upon the evidence before this Court I am not satisfied that the restricted women's knowledge was fabricated or that it was not part of genuine Aboriginal tradition'. Further, Justice von Doussa found the nine Ngarrindjeri women who testified about their beliefs to be 'credible witnesses who genuinely hold the beliefs and recollections expressed by them'. 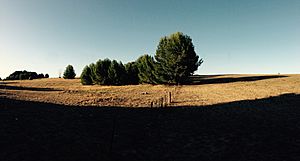 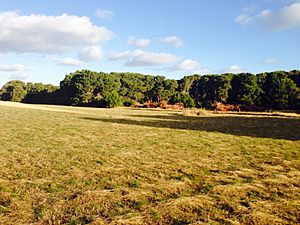 Grassland & Forest scene, located on the northern part of the Island.

Mundoo Island (35°33'4.35"S 138°55'0.86"E) is a medium-sized island off the east coast of the island. Mundoo Island is a privately owned cattle station. The road acts also as a barrage to prevent the river water flowing though Murray Mouth into the ocean.

Limestone Island/Goose Island (35°29'30.29"S 138°49'56.99"E) is a small island, which is located in the Game Reserve. It is located 970 metres (3,180 ft)* off the northern coast line of the island. It has a population of 0, and it was named Limestone Island because there is limestone rock formations on the island. The island is rarely set foot on by humans, and it has been known to flood in the middle of winter, making the island fully submerged in water. Limestone Island can be viewed very easily from Goolwa north because it is only 700 metres (2,300 ft)* away. 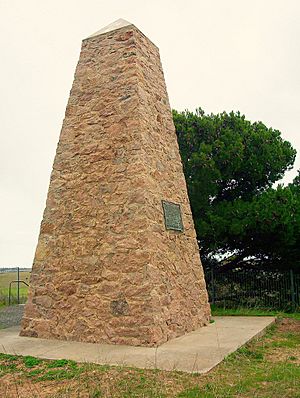 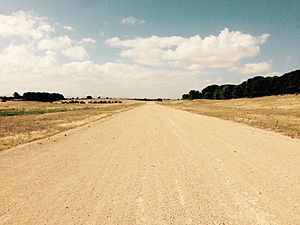 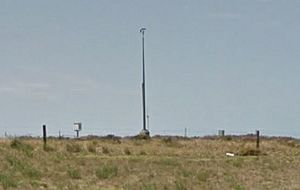 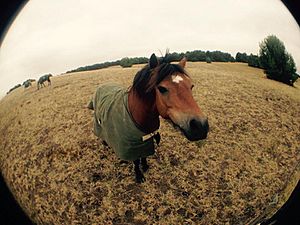 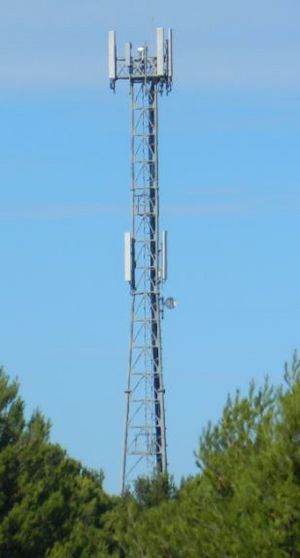 Ngarrindjeri Tribe (35°30'20.71"S 138°48'30.25"E) is the native Aboriginal Tribe of Hindmarsh Island. They are still present at the island, they live on a private property in Alberto Forest. 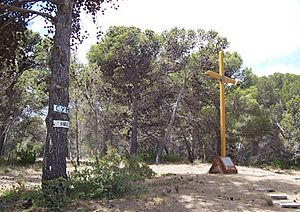 Ukrainian Youth Association Camp Ground (35°30'37.65"S 138°49'26.74"E) is a campground that is located on Randell Road. The camp site was purchased in the early 1970s and today is used by many other organizations. There is an erected cross and monument at the entrance gate. On the grounds are several buildings with kitchen and meeting facilities. 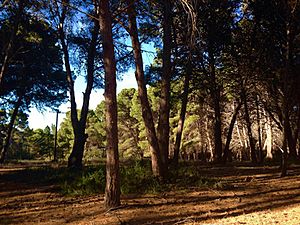 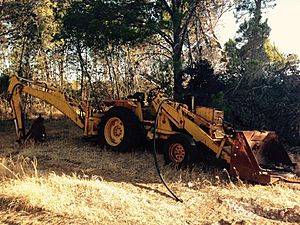 This marsupial is mainly found in the forest and open grassland areas of Hindmarsh Island. These creatures are very sensitive to sound, and usually avoid humans.

These skinks feed on a wide variety of insects, land snails, flowers, fruits and berries. The lizards often hide below the pine needles in the forest or between rocks.

This species is widespread across much of Island. However it is very common along the coastline and in the forest. They often seek shade as much as they can. They are sometimes found as individual birds, but they are most often reported as a group.

The red-bellied black snake (Pseudechis porphyriacus) is a black snake with a distinctive red belly. It widely distributed on the Island. Its venom is capable of causing significant pain and numbness. The snake is hibernating in winter and is found in the forest and grasslands only in summer.

The Australian magpie (Cracticus tibicen) is a medium-sized black and white bird native to Australia. It is found all over the Island, making it the most common bird viewed on Hindmarsh Island.

The Barn owl (Tyto alba) is an owl that is only found around the coastline of Australia. It makes a distinctive sound, when it is positioned in a high tree mostly during the night. The forests on Hindmarsh Island are a popular place for the owls to live.

The little penguin (Eudyptula minor) is the smallest species of penguin. The penguins used to be found along the south coast of the Island, until the 1970s when people where inhabiting the island, the penguins struggled for survival and eventually became extinct in the late 1970s. 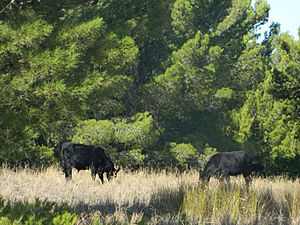 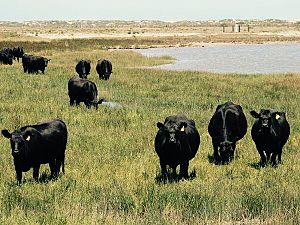 Wagyu bulls seen on the southern part of the Island, close to the Coorong National Park

The bull was introduced to Hindmarsh Island in the 1960s. Some of the bulls were brought in to forests and into farm areas. Bulls in the forest are normally seen sitting in the shade or eating grass amongst the trees. People are warned not to interfere with the bulls in the forest, because they could become aggressive. Bulls are widespread across the island.

The European rabbit (Oryctolagus cuniculus) is a European rabbit that was introduced to the island in the 1950s. They can vary in colour, sometimes gray, white or even black. They can blend into their surroundings very well; they are mostly found in the forest. They are very shy animals and tend to sprint away when approached by a human.

The Red Fox has been present on the island since the 1850s, when they were introduced from Europe. They are extremely invasive creatures, and widely considered as pests. They mostly present on the southern coast of the island, where they enjoy the isolation. The Red Fox is an extremely shy animal, and will avoid humans when confronted.

All content from Kiddle encyclopedia articles (including the article images and facts) can be freely used under Attribution-ShareAlike license, unless stated otherwise. Cite this article:
Hindmarsh Island Facts for Kids. Kiddle Encyclopedia.