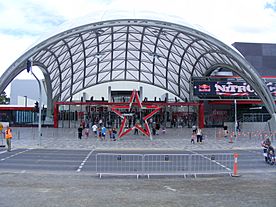 Hindmarsh is an inner suburb of Adelaide, South Australia. It is located in the City of Charles Sturt.

The suburb is located between South Road to the west and North Adelaide. The River Torrens forms its southern boundary and the Grange and Outer Harbour railway line forms the northeast.

Hindmarsh was the first private town laid out in the colony of South Australia. The Village of Hindmarsh was established on land owned by Governor Hindmarsh which, in 1838, he appears to have sold to relatives. It seems the Governor "acquired a dubious reputation by prohibiting squatting in the Parklands, thus forcing people to acquire land in the subdivision".

The suburb is located between South Road to the west and North Adelaide. The River Torrens forms its southern boundary and the Grange and Outer Harbour railway line forms the northeast.

The 2016 Census by the Australian Bureau of Statistics counted 231 persons in Hindmarsh on census night. Of these, 61.1% were male and 38.9% were female.

Within Hindmarsh is the 16,500-seat Hindmarsh Stadium, home to the Adelaide United football club, the Adelaide Entertainment Centre and the Seven Network's Adelaide studio.

There are several cafes and restaurants along Port Road and elsewhere in the suburb. 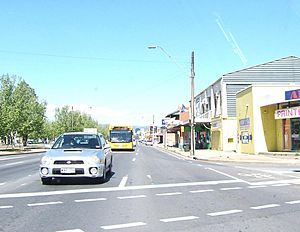 Tram stop outside the Entertainment Centre.

Port Road is the main arterial road connecting the suburb to the Adelaide city centre, while South Road forms its western boundary.

Hindmarsh is serviced by public transport run by the Adelaide Metro:

All content from Kiddle encyclopedia articles (including the article images and facts) can be freely used under Attribution-ShareAlike license, unless stated otherwise. Cite this article:
Hindmarsh, South Australia Facts for Kids. Kiddle Encyclopedia.