Croydon is an inner western suburb of Adelaide, South Australia. It is located in the City of Charles Sturt.

The land on which the suburb now stands was purchased in 1853 by Alfred Watts and Philip Levi. They laid out the Village of Croydon in 1855, comprising Croydon Farm of 40 acres (16 ha) and lots of up to 5 acres (2.0 ha). The village may have been named for Croydon, England, then a part of Surrey, the same county in which Levi had been born.

Croydon lies on the western side of South Road, in the section between Port Road and Torrens Road. It is a small inner western suburb of Adelaide. 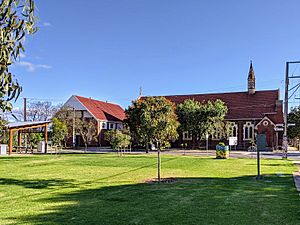 In terms of religious affiliation, 33.7% of Croydon residents state that they were irreligious in 2016, 25.5% stated that they were Catholic, 14.5% stated they were Eastern Orthodox, and 4.4% attributed themselves to being Anglican. Within Croydon, 86.2% of the residents were employed, with 7.9% being unemployed and 5.8% away from work.

On Elizabeth Street, there are cafes (Croydon Social, Queen Street Cafe,), a bakery (Red Door Bakery), hairdresser (Curious Orange) and retro clothing & homewares (Hype & Seek) furniture shops (One Small Room) clothing boutique ( Azalia). Croydon Social also opens in the evening serving pizza from its wood oven and is licensed. This section of Elizabeth Street is commonly referred to as Queen Street, and some of the names of the shops refer to Queen Street. On Queen Street proper (which runs off Port Road until becoming Elizabeth Street) there is also a hairdresser, a pilates studio and a children's party venue. On Port Road is a warehouse shopping complex with large parking space including Officeworks, Rivers, The Salvation Army Superstore and other retailers.

A park is located on Day Terrace beside Croydon railway station. 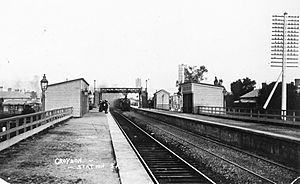 Croydon is bounded by Torrens Road to the north, South Road, to the east and Port Road to the south.

Day Terrace in Croydon, which runs parallel to the Outer Harbor/Grange Train Line is part of the Outer Harbor Greenway, a bicycle route, which provides a family-friendly bicycle path from the City of Adelaide to Outer Harbor via Port Adelaide. 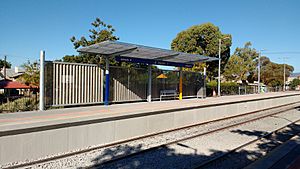 The Grange and Outer Harbor train services pass through the suburb. The closest station is Croydon.

The suburb is serviced by buses run by Adelaide Metro.

All content from Kiddle encyclopedia articles (including the article images and facts) can be freely used under Attribution-ShareAlike license, unless stated otherwise. Cite this article:
Croydon, South Australia Facts for Kids. Kiddle Encyclopedia.