West Croydon has a population of 4,141 as of the ABS 2016 census, and is located 5 km west of the Central Business District of Adelaide. The population has changed greatly over the past 15 years as older residents move away, and younger residents move in.

The Suburb is within the Federal seat of Adelaide and the City of Charles Sturt. Until the early 1920s the suburb was a farming area with infill occurring until the 1970s.

The 2016 Census data by the Australian Bureau of Statistics counted 4,141 people within the suburb of West Croydon. Of these 4,141 people, the suburb counted an exactly 50/50 split between males and females, with there being 2,068 males and 2,068 females counted.

West Croydon transformed from mostly farmland into a suburb in 1925 when the Shillabeer family sold a large portion of East View Farm (established in 1840). In 1944 the Shillabeer farm homestead was purchased by the state government and became the Croydon Technical High School, which later changed name to Croydon High School. Adelaide Secondary School of English moved to the site in 1998.

The first Allenby Gardens Post Office was renamed West Croydon on 1 March 1945 and closed in 1971.

The O-I Adelaide Manufacturing plant located on the far western boundary of West Croydon started manufacturing Glass in 1914. The plant continues to produce wine bottles to this day and is set up to service the wine industry in South Australia. It is the major wine bottle producer and supplier to Barossa, McLaren Vale Vale, and the Hunter Valley.

West Croydon is serviced by Torrens Road to the north and Port Road to the south, with Rosetta Street connecting the two roads and running approximately through the middle of the suburb. 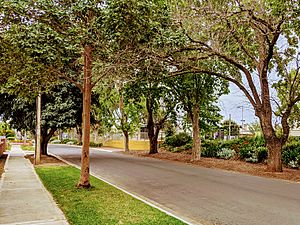 The suburb is well-serviced by Adelaide Metro public transport with trains to the City of Adelaide and Outer Harbor/Grange departing from West Croydon Train Station and various bus routes on both Torrens Road and Port Road.

West Croydon is part of Hindmarsh Ward in the City of Charles Sturt local government area.

West Croydon lies in the state electoral district of Croydon and the federal electoral division of Adelaide. 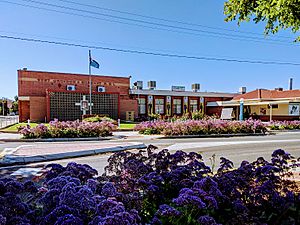 MJ McInerney Reserve, Carnarvon Reserve and Croydon Avenue Reserve are all located in West Croydon. MJ McInerney Reserve received a significant upgrade in 2019/20 and received the award for the Best Playspace Over $500k at the 2020 Parks & Leisure Australia (SA/NT) Awards of Excellence.

Croydon High School closed at the end of 2006, the site is now occupied by the School of Languages and the Adelaide Secondary School of English. The Australian Islamic College Adelaide is also located in West Croydon.

All content from Kiddle encyclopedia articles (including the article images and facts) can be freely used under Attribution-ShareAlike license, unless stated otherwise. Cite this article:
West Croydon, South Australia Facts for Kids. Kiddle Encyclopedia.