Kilkenny is an inner north-western suburb of Adelaide, South Australia. It is located in the City of Charles Sturt. It is named after Kilkenny (Cill Chainnigh), Ireland.

The area incorporating the current suburb of Kilkenny was subdivided in 1849 as the Township of Kilkenny.

Centro Arndale is located on Torrens Road in the north of the suburb.

The main park in the suburb is Alton Reserve on Reynell Street. McInerny Reserve, in West Croydon, is accessible from Pinda and Mundulla streets. 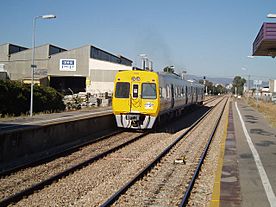 Kilkenny is serviced by Regency Road and Torrens Road, the latter of which connects the suburb to Adelaide city centre.

Kilkenny is serviced by public transport run by the Adelaide Metro.

The Grange and Outer Harbour railway lines pass through the suburb. The closest station is Kilkenny.

The suburb is serviced by bus routes run by the Adelaide Metro.

All content from Kiddle encyclopedia articles (including the article images and facts) can be freely used under Attribution-ShareAlike license, unless stated otherwise. Cite this article:
Kilkenny, South Australia Facts for Kids. Kiddle Encyclopedia.