Woodville North is a north-western suburb of Adelaide 10 km from the Adelaide city centre, in the state of South Australia, Australia and falls under the City of Charles Sturt. The post code for Woodville North is 5012. It is adjacent to Pennington, Athol Park, Woodville Gardens, Mansfield Park, Woodville and Kilkenny. It is bordered to the east by Hanson Road to the west by Carlton Crescent, to the south by Torrens Road and to the north by Hamilton Road. The suburb is residential, apart from an industrial pocket to the northwest.

There is no primary school in the area; the nearest are the public Pennington Primary School, the R-2 campus of Pennington Junior Primary School, and Ridley Grove Primary School in the adjacent suburbs of Pennington and Woodville Gardens. Currently, the local zone high school is Woodville High School, in Woodville. There are a few shops and medical practices on Hanson Road, but the closest shopping centre is the Arndale Shopping Centre. The Finsbury Reserve on Park Avenue provides a venue for recreation. The al-Khalil mosque on Torrens Road provides a facility for Islamic worship. 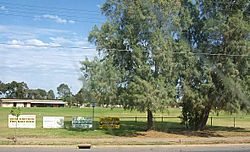 The southern pocket of Woodville North used to be a much stronger and active industrial area, with a Government Supply Depot for military purposes operating in the area during the Second World War, which was the basis for the existence of a railway line and station that is now the location of an Islamic mosque .

Woodville North Post Office opened on 14 February 1966. An earlier office of the same name was renamed Kilkenny North in 1964.

Woodville North is home to a large immigrant population. The initial settlement of the suburb coincided with a large wave of immigrants from Eastern Europe following the Second World War. Although most of their children have moved on, a large number of immigrant retirees still live in the area. Another wave of immigration occurred in the 1980s, when Vietnamese immigrants arrived after the Vietnam War. Currently, more than 50% of the population is from a non-English speaking background.

All content from Kiddle encyclopedia articles (including the article images and facts) can be freely used under Attribution-ShareAlike license, unless stated otherwise. Cite this article:
Woodville North, South Australia Facts for Kids. Kiddle Encyclopedia.