Cheltenham is a suburb of Adelaide, South Australia. It is located on Kaurna Land in the City of Charles Sturt.

The suburb lies between Port Road and Cheltenham Parade, which form its southwest and eastern boundaries respectively. The suburb is split in two by the Outer Harbor railway line.

Cheltenham Cemetery, located between Port Road and Cheltenham Parade, was established in 1876. 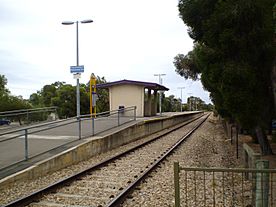 Cheltenham is serviced by Port Road, connecting the suburb to Port Adelaide and Adelaide city centre, and by Cheltenham Parade.

Cheltenham is serviced by public transport run by the Adelaide Metro.

The Outer Harbor train service passes through the suburb. The closest stations are Cheltenham and Cheltenham Racecourse. (now closed).

Trams previously ran through Cheltenham, but the lines were removed.

The suburb is serviced by bus routes run by the Adelaide Metro.

All content from Kiddle encyclopedia articles (including the article images and facts) can be freely used under Attribution-ShareAlike license, unless stated otherwise. Cite this article:
Cheltenham, South Australia Facts for Kids. Kiddle Encyclopedia.