Alberton is a metropolitan suburb in Adelaide, South Australia, about 20 minutes drive from the city. Part of the City of Port Adelaide Enfield, it is bordered by the suburbs of Rosewater, Queenstown, Cheltenham and Port Adelaide.

Alberton, like Port Adelaide, is rich in historical significance. On 7 March 1839, the South Australian Company was granted private subdivision of preliminary section 423. Section 423 was sold as 'The Town of Albert' and subsequently became 'Albert Town' after Prince Albert, Prince Consort of Queen Victoria. Eventually, 'Alberton' became commonly used and around the turn of the century was officially adopted as the suburb's name.

With demand for workers at the Port and homes for these workers needed, late in 1840 there were already 61 houses and 235 residents in Alberton. The layout of 'Albert Town' originally had provisions for four public squares, two of which still exist. St Georges' Square became the site for the Anglican Church while St Andrew's Square was later subdivided and became the site of the Trinity Uniting Church. St Patrick's Square and Company Square are today still used as public recreation areas (Couper-Smartt, 2003).

Many of the streets in Alberton took the names of the original purchasers while others, such as 'Prince', 'Queen' and 'King' Streets reflect their English heritage.

Alberton Oval is located on Queen Street. The ground is used for Australian rules football and cricket and has a capacity of 15,000 people with seated grandstands holding 2,000.

Alberton Oval is the training and administration base for the Port Adelaide Football Club.

First licensed in 1848, the Alberton Hotel is one of the oldest hotels in South Australia. For the past 60 years, it has been owned and operated by the Brien family. The old bluestone structure still stands at the same spot on the corner of Port Road and Sussex Street.

Located on Parker Street, the former Alberton Cemetery was opened in 1847 and officially closed in 1874, with the last burial being conducted in 1922. In 1994, the land on which the former cemetery was located was converted into a park by the City of Port Adelaide. 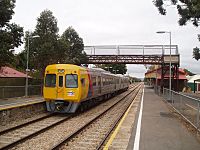 The stone and brick building on the Port Adelaide-bound platform is the original station building dating from 1856.

There is still a regular train service from Alberton station to Adelaide and Outer Harbor. Unfortunately the ticket office has been closed for the past twenty years and this contributes to the station buildings being a frequent target for vandalism and graffiti.

All content from Kiddle encyclopedia articles (including the article images and facts) can be freely used under Attribution-ShareAlike license, unless stated otherwise. Cite this article:
Alberton, South Australia Facts for Kids. Kiddle Encyclopedia.