Krispy Kreme was founded by Vernon Rudolph, who bought a yeast-raised recipe from a New Orleans chef, rented a building in 1937 in what is now historic Old Salem in Winston-Salem, North Carolina, and began selling to local grocery stores. Steady growth followed an ambitious expansion as a public company in the period 2000-2016, which ended up unprofitable.

In 2016, the company returned to private ownership under JAB Holding Company, a private Luxembourg-based firm.

In 1933, eighteen-year-old Vernon Rudolph, along with his brother Lewis Rudolph, began working for his uncle, Ishmael Armstrong, who owned a small general store in Paducah, Kentucky that sold a wide variety of goods, including its very popular doughnuts.

The store struggled during the Great Depression, so in 1934, Vernon and Ishmael decided to move to the larger city of Nashville, Tennessee where they hoped business would be better. The uncle and nephew focused solely on selling their doughnuts and opened "The Krispy Kreme Doughnut Company" in a rented store. The shop did so well that Vernon's father also left Kentucky and moved to Nashville to help sell doughnuts. 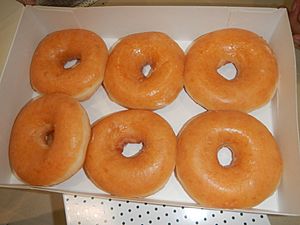 In 1937, Vernon Rudolph opened his own store, deciding on Winston-Salem, North Carolina for the location when he learned that his favorite cigarette company, Camel Cigarettes, was headquartered in the small North Carolina city.

Rudolph primarily sold to convenience stores; however, he also sold hot doughnuts to individual customers who came during production time between midnight and 4 a.m. In the early 2010s, the company began developing shops with tunnel ovens, which allow for an all-day "Hot Now" hot doughnut experience. 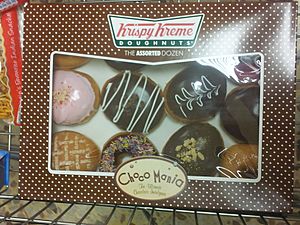 The first store in North Carolina was located in a rented building on South Main Street in Winston-Salem in what is now called historic Old Salem.

The Krispy Kreme logo was designed by Benny Dinkins, a local architect. The first Krispy Kreme bakery outside the South opened in Akron, Ohio, in 1939.

Expansion occurred in the 1950s. By the 1960s, Krispy Kreme was known throughout the Southeast, and it began to expand into other areas. In 1976, Krispy Kreme Doughnut Corporation became a wholly owned subsidiary of Beatrice Foods of Chicago, Illinois. The headquarters for Krispy Kreme remained in Winston-Salem.

A group of franchisees purchased the corporation back from Beatrice Foods in 1982. 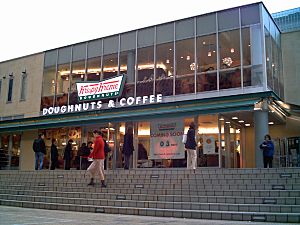 In May 2016, JAB Beech, a German investment firm, announced it made an offer to purchase the company that would make the company privately owned, this was settled in May of 2017. In December 2017, Krispy Kreme moved corporate operations to Charlotte, NC; while Winston-Salem will remain the World Headquarters and maintain the Krispy Kreme Support Center.

Krispy Kreme began another phase of rapid expansion in the 1990s, opening stores outside the southeastern United States where most of their stores were located. Then, in December 2001, Krispy Kreme opened its first store outside the U.S. in Mississauga, Ontario, Canada.

The first Krispy Kreme store to open outside North America was in Penrith, Australia, in Sydney.

All content from Kiddle encyclopedia articles (including the article images and facts) can be freely used under Attribution-ShareAlike license, unless stated otherwise. Cite this article:
Krispy Kreme Facts for Kids. Kiddle Encyclopedia.