Cheerwine is a cherry-flavored soft drink by Carolina Beverage Corporation of Salisbury, North Carolina. It has been produced since 1917, claiming to be "the oldest continuing soft drink company still operated by the same family".

When the Maysville Syrup Company of Maysville, Kentucky went bankrupt in 1917, L.D. Peeler, Hughston Kirby, Kurt Weinmann and other invested businessmen moved the company to North Carolina and renamed it the Carolina syrup company. That same year, Peeler, Kirby and Weinmann purchased a recipe for a cherry flavored soda from a Saint Louis flavor salesman, which eventually became Cheerwine. Though it has been around since 1917, Cheerwine first became a registered trademark in 1926.

The family of Lewis Peeler has run the Cheerwine company since its founding, and his great-grandson Charles Clifford “Cliff” Ritchie has been CEO and president of Cheerwine's parent company, Carolina Beverage Corporation since 1992. 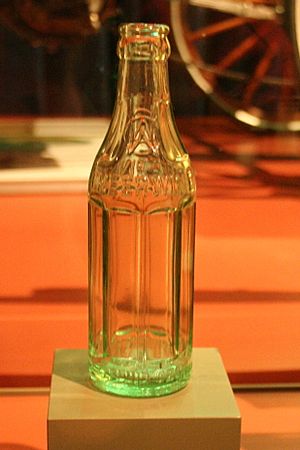 Cheerwine bottle, c. 1920, on display at the North Carolina Museum of History

Cheerwine has a mildly sweet flavor with strong cherry notes, most notably black cherry; is burgundy-colored; and has an unusually high degree of carbonation compared to other soft drinks. The product was named for its color and taste; the company website states that "it made sense to name a burgundy-red, bubbly, cherry concoction—Cheerwine." The "Retro Cheerwine" variant is sold in glass bottles and is sweetened with cane sugar instead of high fructose corn syrup. Despite its name, Cheerwine is not really a wine and contains no alcohol.

In 2009, the company began a re-branding campaign designed to revamp the drink's image, especially among younger consumers. The re-branding called for a redesign of the Cheerwine packaging, with a new, retro-style logo based on an early Cheerwine logo.

In 2010, Cheerwine partnered with the North Carolina–based doughnut company, Krispy Kreme, and released a limited-offered Cheerwine flavored donut on July 1 of that year. It was sold only at select grocery stores for the month of July, and at the Salisbury Krispy Kreme. The Cheerwine doughnut returned again in July 2011. Cheerwine Kreme, a soda with the flavors of Cheerwine and Krispy Kreme, was sold during the summers of 2016 and 2017.

In 2010, Canton, Ohio–based Old Carolina Barbecue became the first restaurant chain in Ohio to offer Cheerwine as a fountain drink. By 2014, Cheerwine-based products including iced slushy, Cheerwine cakes and floats had become a signature part of the Old Carolina concept.

Morgan Shepherd ran an entry in the NASCAR Busch Series in the mid-1990s with Cheerwine sponsorship.

Cheerwine is sometimes mixed with Captain Morgan rum to make a drink called "Captain Cheerwine" or the "Whining Pirate".

A Cheerwine Recipe Book was published in 2017, by Sandy Carol Sider.

Slogans have included "Born in the South. Raised in a Glass", "Nectar of the South", "Betcha can't not smile." and "Uniquely Southern".

Cheerwine has long been the unofficial drink of the YMCA's Conference on National Affairs. Occurring in June-July each year at the Blue Ridge Assembly Historic District in Black Mountain, North Carolina, the conference is a place where young people representing the U.S. states meet and discuss the important issues in their respective communities.

Cheerwine is currently available in much of the southeastern United States, from West Virginia south to Florida, but is better known in the Carolinas. Other spots to find Cheerwine are the many "specialty soda" stores throughout the country, as well as WinCo Foods in Washington state, Cracker Barrel restaurants, Cook Out restaurants, Sheetz convenience stores in Ohio and Pennsylvania, and overseas, in Oslo, Norway. It is sold either as a single bottle or as a pack of four.

In April 2005, other regions of the United States began to bottle Cheerwine, mainly through Pepsi distributors.

On March 9, 2011, The New York Times Diner's Journal referred to "The Expanding Cult of Cheerwine".

On April 5, 2011, the company announced plans for nationwide distribution by 2017, the product's 100th anniversary. The same day, the company also introduced a new advertising campaign, "Born in the South. Raised in a glass." At the time, Cheerwine was available in 12 percent of the nation. Radio commercials for that campaign include "The Caper", where criminals left everything from a store except Cheerwine; and "Battle of the Bulge", in which a soldier from the Salisbury area has two bottles sent to him during World War II and gives one to his friend.

Also in April 2011, Cheerwine announced it was searching for a woman to represent the company as "Miss Cheerwine". Candidates had to be 21 to 25 years old and live in Georgia, Maryland, North Carolina, South Carolina, Tennessee, or Virginia. A company spokesperson stated, "We’re looking for a poised, enthusiastic young woman who can help us spread the legend and get Cheerwine into the hands of our fans with charm, confidence, sweetness and a sense of fun." On June 3, 2011, Spencer Cummings, named the first Miss Cheerwine, began the Miss Cheerwine Summer Legend Tour.

On October 18, 2011, Cheerwine announced plans to partner with Pepsi Beverages Co. in Atlanta, Florida, and Memphis, Tennessee. The same week, the company began using glass bottles to distribute the "Original 1917 Formula" with sugar, as well as introduced 12-pack cans.

In 2005, Cheerwine secured a product placement deal with the producers of the short-lived teen drama Palmetto Pointe, which was filmed in Charleston, South Carolina. As a result, the brand's beverages were shown onscreen in each of the series' five aired episodes.

Cheerwine has sponsored the North Carolina band the Avett Brothers on tour.

In addition to the sponsorships above, they also sponsor the Carolina Hurricanes hockey team. This sponsorship gives Cheerwine LED signage ads, an advertisement spot on the teams bus, and is sold inside PNC Arena for all sorts of events.

All content from Kiddle encyclopedia articles (including the article images and facts) can be freely used under Attribution-ShareAlike license, unless stated otherwise. Cite this article:
Cheerwine Facts for Kids. Kiddle Encyclopedia.