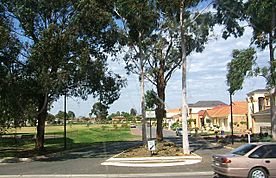 Ridleyton is an inner northern suburb of Adelaide, South Australia. It is located in the City of Charles Sturt.

The area incorporating the current suburb of Ridleyton was originally granted to Osmond Gilles in March 1839. He later transferred it to John Ridley, inventor of the stripper or reaping machine, in June 1842 for £275. In 1873, Ridley lodged a plan to subdivide his land, naming one part Ridleyton.

The Ridleyton Central Shopping Centre services Ridleyton and neighboring suburbs. The centre is accessible from both Hawker Street and South Road. As well as such stores as a pharmacy, bakery and news agency, the centre includes an IGA Foodland supermarket.

Other major businesses in the suburb include:

The Hawker Street (Bowden & Brompton) and Elizabeth Street (Croydon) shopping and dining precincts are within walking distance of Ridleyton.

The largest park in Ridleyton is Albert Greenshields Reserve on Torrens Road. This park includes a Girl Guide hall, barbecue area, public restrooms, creek, playing field and a children's playground. There are laneways both to Wright Street and Blight Street.

There are also small parks on Ryan Place and on the corner of Hythe Street and Wood Avenue.

Ridleyton lies beside the intersection of South Road and Torrens Road, and is thus serviced by both. Hawker Street cuts through the centre of the suburb.

Many of the local streets were established in the 19th century. Consequently, roadways tend to be narrow and, with a small volume of traffic, quiet.

Ridleyton is serviced by public transport run by the Adelaide Metro.

There is no train stop in Ridleyton itself. However, the following train services run nearby.

All content from Kiddle encyclopedia articles (including the article images and facts) can be freely used under Attribution-ShareAlike license, unless stated otherwise. Cite this article:
Ridleyton, South Australia Facts for Kids. Kiddle Encyclopedia.