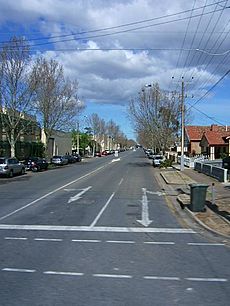 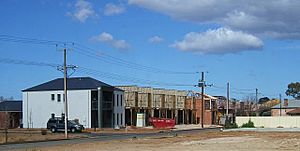 Brompton is an inner-northern suburb of Adelaide, South Australia in the City of Charles Sturt.

Brompton was established in June 1849 and quickly grew. By October of that year, two thirds of the formerly "bare common ground [was] covered with substantial and genteel cottages, thriving shops and wells of excellent water."

The suburb lies between Torrens Road and the Grange/Outer Harbor railway line.

The Bowden Brompton Community Centre is based at 19 Green Street, Brompton.

The Hawker Street shopping and dining precinct, and the Brompton Hotel and the Excelsior Hotel are in the suburb. 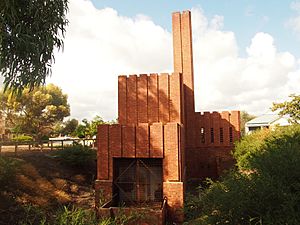 Hindmarsh Incinerator, designed by Walter Burley Griffin in 1935, viewed from the northwest

There are several parks in Brompton, the largest of which is Josiah Mitton Reserve, between Wood Avenue and Burley Griffin Boulevard. The reserve includes the Hindmarsh Incinerator, designed by Walter Burley Griffin in 1935. Completed in 1936, it is one of his two buildings in SA listed as among the 120 nationally significant 20th-century buildings in South Australia, the other being the Thebarton Incinerator at Thebarton.

From 1949 until 1979, Brompton was the home to the world famous Rowley Park Speedway located on the corner of Torrens Road and Coglin Street. Rowley Park was a 358 metres (392 yards) dirt track speedway built in the old Brompton Brick Pits and operated 23 meetings per season (usually October to April) on Friday nights and was capable of holding over 10,000 spectators. The speedway hosted numerous Australian and South Australian speedway championships through its history. From 1954 until 1973, the speedway was promoted by leading Adelaide identity Kym Bonython who made Rowley Park 'the' place to be in Adelaide on a Friday night during summer. Rowley Park closed on 4 April 1979 and is now the site of the Kym Bonython housing estate.

In 1965, Rowley Park was the site of Australia's first Demolition derby.

Brompton is primarily serviced by Torrens Road, which connects the suburb to Adelaide city centre. Hawker Street cuts through the centre of the suburb.

Many of the local streets were established in the 19th century. Consequently, roadways tend to be narrow and, with a small volume of traffic, quiet.

Brompton is serviced by public transport run by the Adelaide Metro.

All content from Kiddle encyclopedia articles (including the article images and facts) can be freely used under Attribution-ShareAlike license, unless stated otherwise. Cite this article:
Brompton, South Australia Facts for Kids. Kiddle Encyclopedia.