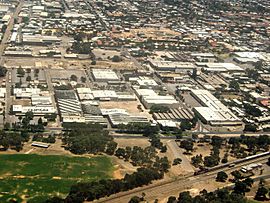 Aerial view of the Clipsal site development in Bowden.

Bowden is an inner northern suburb of Adelaide, South Australia. It is located in the City of Charles Sturt.

The 'Village of Bowden' was established in 1839 by James Hurtle Fisher, who named it after his native village in Northamptonshire.

Bowden had a post office open from 1970 until 1991. Before 1970 the office in the area was named Ovingham; after 1991 the Brompton office has provided postal services.

In October 2008, Premier Mike Rann and Infrastructure Minister Patrick Conlon announced the purchase of the 10-hectare Clipsal factory site in Bowden to become a new "green village". They announced plans for up to 1,500 medium- and high-density Green Star residential apartments, with retail outlets and commercial offices set around a town centre, for the former industrial site. The $1 billion Bowden development was designed to be a "transport-oriented development"(TOD) as envisaged by The 30-Year Plan for Greater Adelaide. At the on-site announcement, Mr Rann said the development was expected to take 12 to 15 years to complete.

Construction on the first stage and parks were officially opened in May 2013 by Premier Jay Weatherill. Construction commenced on first residential dwellings in 2013. First residents moved into their homes in 2014.

The suburb is primarily bounded by the Grange/Outer Harbor railway line, the Gawler railway line and Park Terrace.

Adelaide Bike Kitchen is a community-run group on Gibson Street that teaches people to maintain or build their own bicycles.

Based at Fifth Street, the Cirkidz Circus School teaches circus arts to students of all ages and abilities.

Fontanelle Gallery is an art studio and gallery at Fifth Street.

Uniting Care Wesley Bowden is charity that helps people and families, and is located at Gibson Street.

Activate is a local church based at the corner of Drayton Street and Hawker Street. The Welcome Centre is also at the same location.

The Bowden Brompton Community Centre is based at 19 Green Street, Brompton.

The Hawker Street shopping and dining precinct passes through the suburb.

Parfit Square is the largest park in Bowden. 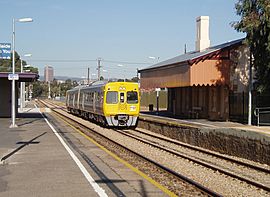 Many of the local streets were established in the 19th century. Consequently, roadways tend to be narrow and quiet with a small volume of traffic.

Bowden's new streets are designed to be 'walkable' and shared by vehicles, bicycles and people. With the new development, the suburb is starting to see a lot more pop-up street art and curbless, tree-lined streets furnished with street furniture on footpaths.

Bowden is serviced by public transport run by the Adelaide Metro.

The tram runs for free when travelling between the Entertainment Centre stop and South Terrace stop in Adelaide's central business district.

The following train services run on the eastern and southern boundaries of the suburb.

All content from Kiddle encyclopedia articles (including the article images and facts) can be freely used under Attribution-ShareAlike license, unless stated otherwise. Cite this article:
Bowden, South Australia Facts for Kids. Kiddle Encyclopedia.