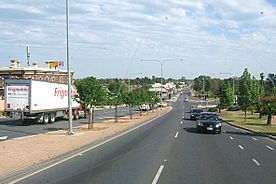 Ovingham is an inner northern suburb of Adelaide, South Australia. It is located in the cities of Charles Sturt and Prospect.

The suburb is located between Park Terrace and the Gawler Central railway line. It is bisected by Torrens Road. It includes what was for a time the suburb Hillside.

Ovingham was established in 1875 by William Whinham. The portion of Ovingham in the City of Charles Sturt (the triangle bounded by the railway line, Torrens Road and Park Terrace) was previously considered to be part of Bowden, known as Bowden-on-the-Hill.

Ovingham Post Office opened on 1 November 1879 but was renamed Bowden in 1970.

The 2006 Census by the Australian Bureau of Statistics counted 654 persons in Ovingham on census night. Of these, 48.2% were male and 51.8% were female.

Ovingham is serviced by Torrens Road, connecting the suburb to Adelaide city centre, and Park Terrace, which forms its south-eastern boundary. Churchill Road heads north out of the suburb.

Ovingham is serviced by public transport run by the Adelaide Metro.

The Gawler Central railway line passes beside the suburb. The closest station is Ovingham.

The suburb is serviced by buses run by the Adelaide Metro.

All content from Kiddle encyclopedia articles (including the article images and facts) can be freely used under Attribution-ShareAlike license, unless stated otherwise. Cite this article:
Ovingham, South Australia Facts for Kids. Kiddle Encyclopedia.