Fitzroy is an inner northern suburb of Adelaide 4 km (2.5 mi) from the Adelaide city centre, in the state of South Australia, within the City of Prospect. It ranks among the most expensive suburbian areas in South Australia. It is adjacent to Prospect, Ovingham, Thorngate and, across the Adelaide Park Lands, North Adelaide.

Fitzroy mainly consists of 19th century multi-storey mansions and leafy European tree-lined streets, which were established by wealthy early South Australian settlers, away from the noise and smells of Adelaide city, where the working classes lived in cramped cottages. Fitzroy once incorporated the present Thorngate.

An historic lane in Fitzroy is Goode Lane, dating back to the mid-19th century. 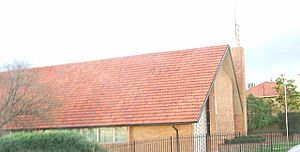 Fitzroy is an attractive and affluent suburb of Adelaide; with many residences being within South Australia's most valuable properties. This highly sought after suburb consists of only a handful of residential streets. There are no non-residential facilities directly within the suburb, aside from the Church of Jesus Christ of Latter-day Saints meetinghouse overlooking Torrens Road. The closest schools in the area are Blackfriars Priory School for boys, and Prospect Primary School, both located in Prospect. There is a boutique shopping strip on Prospect Road, further north in Prospect. Other facilities can be easily accessed by entering North Adelaide.

All content from Kiddle encyclopedia articles (including the article images and facts) can be freely used under Attribution-ShareAlike license, unless stated otherwise. Cite this article:
Fitzroy, South Australia Facts for Kids. Kiddle Encyclopedia.