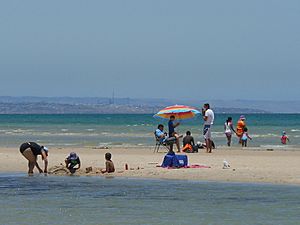 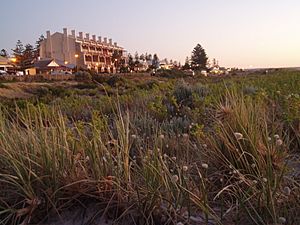 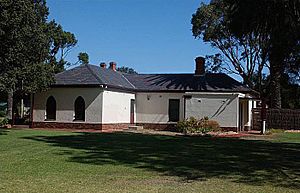 Grange is a coastal suburb of the City of Charles Sturt, in Adelaide, South Australia, located 11 kilometres from the Adelaide city centre. The suburb is named after Captain Charles Sturt's cottage, built in 1840–41, which still stands and is now a museum. In addition to Grange Beach, the suburb has several parks and reserves, as well as the Grange Hotel, which was originally licensed in 1881.

Originally called The Grange, the suburb is named after Captain Charles Sturt's cottage, which originally stood on 500 acres (200 ha) of farmland. Sturt's farm was subdivided in 1878 by a private company intending to establish a beach resort. The cottage still stands and is now a museum.

The 2006 Census by the Australian Bureau of Statistics counted 5,238 persons in Grange on census night. Of these, 47.1% were male and 52.9% were female. The majority of residents (77.1%) are of Australian birth, with an additional 5.9% naming England as their country of birth.

A community centre is located on Charles Sturt Avenue.

The Grange Hotel, located on the esplanade at Grange Beach, was originally licensed in 1881.

In addition to Grange Beach, the suburb has several parks and reserves. Grange Recreation Reserve is located in the northwest of the suburb and offers a playing field and playground. Playgrounds are also located in Lines Reserve, on Lines Street, and Kirkcaldy Park, on Kirkcaldy Avenue. The greenspace in the centre of the suburb is notable as being the location of Charles Sturt's still-extant cottage.

Grange is serviced by Grange Road, connecting the suburb to Adelaide city centre. Seaview Road and Military Road link Grange to several of Adelaide's other coastal suburbs. Frederick Road, on the suburb's eastern boundary, connects the suburb with the shopping and entertainment facilities in West Lakes.

All content from Kiddle encyclopedia articles (including the article images and facts) can be freely used under Attribution-ShareAlike license, unless stated otherwise. Cite this article:
Grange, South Australia Facts for Kids. Kiddle Encyclopedia.