West Lakes is a suburb of Adelaide, the state capital of South Australia, Australia. It lies within the City of Charles Sturt. It contains the Westfield West Lakes Shopping Centre, AAMI Stadium and the Riverside Golf Course. It also contains Delfin Island, a residential island within Boating Lake. 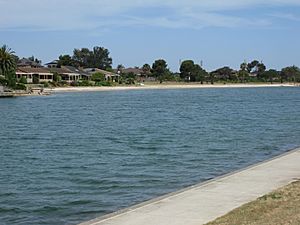 The suburb is home to Football Park (also known by its sponsored name of AAMI Stadium), a 51,240-seat sports stadium and home of the SANFL between 1974 and 2013.

All content from Kiddle encyclopedia articles (including the article images and facts) can be freely used under Attribution-ShareAlike license, unless stated otherwise. Cite this article:
West Lakes, South Australia Facts for Kids. Kiddle Encyclopedia.