Seaton is a suburb of Adelaide, South Australia, located in the western suburbs near Findon, Grange and West Lakes. Seaton is home to the Royal Adelaide Golf Club.

Prior to World War II the area was largely rural, with market gardens, poultry farms and lucerne paddocks, bounded to the west by sand dunes. With the rapid development of industry during and after the war years, including the munitions factory at Hendon and the General Motors-Holden motor vehicle assembly plant at Woodville, the South Australian Housing Trust developed large areas of low-cost workers' housing in Seaton and other nearby suburbs. 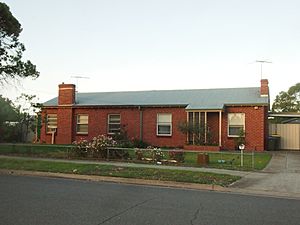 Seaton is known for its football team, the Seaton Ramblers, who play in Division Three in SAAFL.

All content from Kiddle encyclopedia articles (including the article images and facts) can be freely used under Attribution-ShareAlike license, unless stated otherwise. Cite this article:
Seaton, South Australia Facts for Kids. Kiddle Encyclopedia.