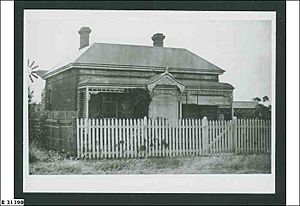 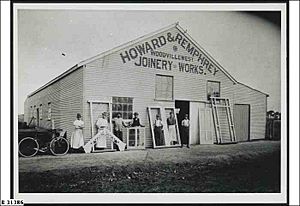 Colonial settlement of the area dates from the mid 1800s, with growth during the 1870s and 1880s. In February 1879, the township of Woodville West was advertised for sale in allotments, with one advertisement stating, "the township of Woodville West is pleasantly situated on the western side of the Port Road, and has the great advantages of easy communication with the port by means of the Alberton and Queenstown Tramway, with the city by trains passing every 45 minutes, the Woodville Station, and with the sea by the Grange and Military Road Railway. The soil is very fertile and well adapted for gardening."

Some growth took place during the interwar period. The most significant development occurred during the post-war years, particularly during the 1950s and 1960s. The population declined slightly during the 1990s, and then fluctuated slightly between 2001 and 2011, a result of small changes in dwelling stock and the average number of persons living in each dwelling. Woodville West Post Office opened on 3 February 1947 and closed in 1986.

The most common occupations in Woodville West included Professionals (18.4%), Clerical and Administrative Workers (17.7%), Technicians and Trades Workers (14.6%), Community and Personal Service Workers (11.4%), and Labourers (10.8%). Woodville West has a 7% unemployment rate.

All content from Kiddle encyclopedia articles (including the article images and facts) can be freely used under Attribution-ShareAlike license, unless stated otherwise. Cite this article:
Woodville West, South Australia Facts for Kids. Kiddle Encyclopedia.