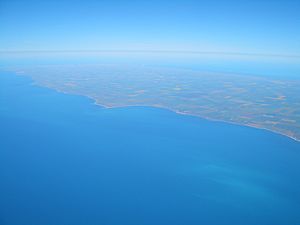 Gulf St Vincent, sometimes referred to as St Vincent Gulf, St Vincent's Gulf or Gulf of St Vincent, is the eastern of two large inlets of water on the southern coast of Australia, in the state of South Australia, the other being the larger Spencer Gulf, from which it is separated by Yorke Peninsula. On its eastern side the gulf is bordered by the Adelaide Plains and the Fleurieu Peninsula. To the south it is defined by a line from Troubridge Point on Yorke Peninsula to Cape Jervis on Fleurieu Peninsula. Its entrances from the southwest are from Investigator Strait, and to the southeast from Backstairs Passage, which separate Kangaroo Island from the mainland. Adelaide, the South Australian capital, lies midway along the gulf's east shore. Other towns located on the gulf, from west to east include Edithburgh, Port Vincent, Ardrossan and Port Wakefield and Normanville.

The Aboriginal name given to it by the original inhabitants of the area, the Kaurna people was Wongajerla, also spelt Wongga Yerlo or Wonggayerlo, meaning "western sea".

It was named Gulph of St. Vincent by Matthew Flinders on 30 March 1802, in honour of Admiral John Jervis (1st Earl of St Vincent) who won a naval victory off Cape St. Vincent, Portugal. It was shortly afterwards (after his meeting with Flinders at Encounter Bay on 8 April 1802) mapped by Nicolas Baudin, who named it Golfe de la Mauvaise or Golfe de la Misanthrophie. In the following year Louis de Freycinet renamed it Golphe Josephine to honour Josephine Bonaparte.

Due to Flinders' lengthy imprisonment on Mauritius during his return to England, the publication of Baudin's map preceded that of Flinders by three years.

The Adelaide Desalination Plant which is located on Gulf St Vincent's eastern shore in Lonsdale, supplies the Adelaide metropolitan area with desalinated water from the gulf. It officially opened in 2013.

The Gulf teems with crustacea and polychaeta, as well as various species of sea squirts and sea urchins. The benthos is a soft sediment shelf, with species of zosteraceae around the mouth of the Port River. The cardinalfish genus Vincentia takes its name from Gulf St Vincent where the type specimen of its type species was collected.

All content from Kiddle encyclopedia articles (including the article images and facts) can be freely used under Attribution-ShareAlike license, unless stated otherwise. Cite this article:
Gulf St Vincent Facts for Kids. Kiddle Encyclopedia.