Troubridge Island is an island located in the south west corner of Gulf St Vincent in South Australia near the eastern edge of the Troubridge Shoals off the east coast of Yorke Peninsula about 8 kilometres (5.0 mi) southeast by east of the town of Edithburgh It is notable for being a site of an operating lighthouse from 1856 until 2002 and as a site for a sea bird rookery. Since 1982, the island has been part of the Troubridge Island Conservation Park.

Troubridge Island is located approximately 8 kilometres (5.0 mi) southeast by east of the town of Edithburgh near the eastern edge of the Troubridge Shoals. It is a ‘crest of sand’ which is permanently above high tide and which is stabilised by the presence of vegetation. At high water, the Island had an area of 2 hectares (4.9 acres) and a height of 5 metres (16 feet) as of 1996. At low water, its intertidal zone extends for at least one kilometre (0.62 mi) from its high water mark. The island is most accessible at high tide, when there is sufficient water over the intertidal zone to allow a boat reach the permanently dry land. Since 1988, access to the island has been restricted to these with permits provided by the Department of Environment, Water and Natural Resources.

Most of the 31 plant species recorded from the island are introduced. The vegetation consists of low shrubland dominated by nitre bush, grey saltbush and African boxthorn. Other prominent plants present are tree mallow, sea rocket, marram grass and hairy spinifex.

Fauna on Troubridge Island is represented by both birds and reptiles. As of 2009, almost 60 native bird species have been recorded including 21 species of conservation significance and 22 species listed as migratory. Dominant species include black-faced cormorants, Caspian terns, crested terns and fairy terns, Pacific gulls, little penguins, pied cormorants and silver gulls.

As of 1996, starlings, an introduced species, is reported as having a population of 10,000 and was "competing with native species for roosting sites and fouling the keepers' cottages." The following reptile species have been recorded on Troubridge Island: marbled geckos and sleepy lizards. 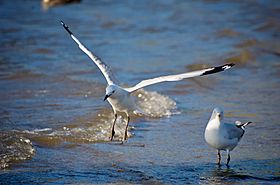 The island is an important breeding site for silver gulls

Matthew Flinders discovered the Troubridge Shoals on 1 April 1802, however he did not report the existence of the island.

A lighthouse known as the Troubridge Island lighthouse was erected on the island as a means to reduce shipping losses caused by the strandings on the Troubridge Shoals. It was first lit in 1856. It was converted to automatic operation in 1981 and its role as a navigation aid was taken over progressively from 1980 by a new lighthouse located on Troubridge Hill on Yorke Peninsula to the west of Troubridge Island. It was decommissioned in 2001.

Troubridge Island is part of Troubridge Shoals which extend across to Yorke Peninsula and constitutes a hazard to shipping. Troubridge Shoals has been the cause of over 33 wrecks and groundings. During the period October 1849 to May 1850, at least seven vessels ran aground. precipitating the erection of a lighthouse in 1855.

When the Parsee was wrecked on the shoals on 13 November 1838 the survivors landed at the adjacent Troubridge Island.

Marion Reef, south of Troubridge Island, was named for the Marion, which ran aground in 1851 as did many others, has been (incorrectly) identified as part of Troubridge Shoals.

The island (and some of the adjoining sandbar exposed at low tide) has been nominated as an Important Bird Area (IBA) known as the Troubridge Island Important Bird Area by BirdLife International. The basis for the nomination is that the IBA supports over 1% of the world populations of both black-faced cormorants (with up to 4000 individuals) and silver gulls (with up to 10,000 breeding pairs) as well as supporting "significant numbers of the vulnerable Fairy Tern".

All content from Kiddle encyclopedia articles (including the article images and facts) can be freely used under Attribution-ShareAlike license, unless stated otherwise. Cite this article:
Troubridge Island Facts for Kids. Kiddle Encyclopedia.