Kids Encyclopedia Facts
Not to be confused with Edinburgh. 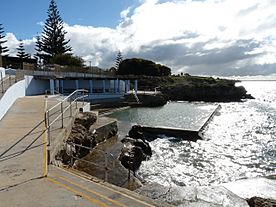 Edithburgh is a small town on the south-east corner of Yorke Peninsula situated on the coastline of Salt Creek Bay, in the state of South Australia. Edithburgh is about 50 km (31 mi) west of Adelaide across Gulf St Vincent, but 226 km (140 mi) away by road. At the 2016 census, the locality had a population of 516 of which 454 lived in its town centre.

In the Narangga language of the indigenous Narungga people, Edithburgh was known by the place name Pararmarati. Some sources give the pronunciation 'Barram-marrat-tee'. The first European pioneers arrived in the 1840s and were sheep graziers and pastoralists. With closer settlement, in 1869 the Marine Board fixed a site for a jetty to service the developing farming district. An adjacent town was then surveyed, the layout closely emulating (on a smaller scale) that of Adelaide, with a belt of parklands. Edithburgh was named by Governor Sir James Fergusson after his wife Edith. The new jetty opened in 1873.

Occupying a commanding position on the coastline at semi-circular Salt Creek Bay, Edithburgh is noted for its magnificent seascapes which include steep rocky cliffs and sandy beaches. Troubridge Island can be seen offshore. As a result, tourism is now a growth industry. It is a popular holiday destination with a variety of accommodation types available including a caravan park. The Troubridge Hotel and the Edithburgh Hotel sit diagonally opposite each other at the intersection of Blanche and Edith Streets, both named after Governor Fergusson's daughters.

For those who prefer not to swim in the open sea, the town has a unique seawater swimming pool constructed at the shoreline. Its sheltered waters are refreshed with each rising tide. 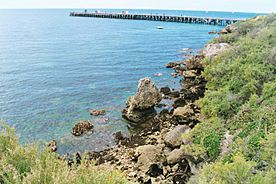 Many divers, scientists and marine conservationists list Edithburgh jetty as one of South Australia's premier shore-dive locations. Access is easy thanks to steps on northern and southern sides of the structure.

The jetty extends eastwards into Gulf St Vincent and is 170 m in length. The jetty is supported by pylons in groups of four. Divers and snorkelers can safely and closely observe dense, multi-coloured colonies of temperate corals and sponges on the jetty pylons. The pylons also provide refuges for various fish, crustacea, nudibranchs and other marine invertebrates.

Several of the state's iconic marine species can be seen beneath or near the jetty, including the Leafy sea dragon and the Striped pyjama squid.

The maximum dive depth is 10–12 m and site is rewarding for visitors of all experience levels.

In December 2013, maintenance works were conducted at the Edithburgh jetty by a contractor working for the local council. An estimated 50 jetty pylons were removed from the periphery of the jetty. They were either sawed off at the seabed, or pulled up from the substrate. This resulted in an immediate loss of habitat and marine life, upsetting many members of the scuba diving and marine conservation community.

Jetty pylons had been assessed some years prior by the State Government's Department of Transport, Energy and Infrastructure (now known as the Department of Planning, Transport and Infrastructure) and identified as a public liability risk. Impacts to the marine environment or the site's iconic status as a dive tourism hotspot do not appear to have been considered by DPTI or the local council.

Recreational divers from M.E. Dive Club witnessed the early works and arranged a group of divers to informally assess the damage the following weekend. The pylon removal works were not publicly advertised nor was the dive or tourism community consulted on the works. The Scuba Divers Federation of South Australia and the Marine Life Society of South Australia both responded to the issue by drafting letters to responsible Government bodies.

All content from Kiddle encyclopedia articles (including the article images and facts) can be freely used under Attribution-ShareAlike license, unless stated otherwise. Cite this article:
Edithburgh Facts for Kids. Kiddle Encyclopedia.