Wool Bay (formerly Pickering) is a locality and a former government town in the Australian state of South Australia on the east coast of southern Yorke Peninsula. It is located between Stansbury and Coobowie on the Yorke Peninsula, approximately 220 kilometres from Adelaide by road.

Originally called Pickering when it was established in 1872, the town is built on cliffs overlooking a protected bay. In 1882 a jetty was built. Wide enough to roll wool bales out to the ships, the locals came to know the jetty as Wool Bay jetty and by 1940, the name of the town had also changed to Wool Bay. For many years, the town functioned as a wool, grain and lime exporting port. 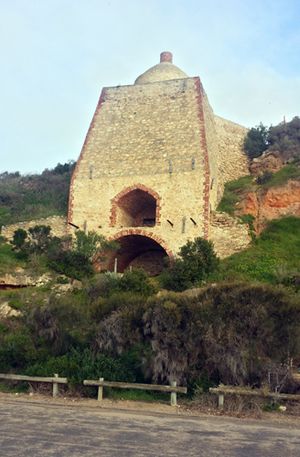 Between 1900 and 1910, six lime kilns were built on top of, and along the base of, the rugged cliffs overlooking the bay. Lime was burnt to create quicklime, an important ingredient in mortar and brick-making. Today, the ruins of only one kiln remain. Perched precariously on the side of the cliff, or so it seems when looking up from the jetty, this kiln was the cutting edge of wood-fired lime burning technology when it was built by Mr Miller from David Miller & Sons, and opened in 1910. Technological changes and a decrease in the demand for lime during the 1950s and 1960s led to the closure of the Wool Bay kilns. Most of the remaining kilns and supporting infrastructure were demolished in the 1970s. Today, the town of wool bay is popular with holiday makers. The beach of Wool Bay features a permanently moored pontoon which is maintained by the local progress association, several sun shelters and a cement boat ramp. A number of marine animals inhabit the waters of Wool Bay; dolphins and stingrays rays can frequently be seen close to shore, and fur seals often feed off the rocky outcrop between the second and third coves past the main bay in the early evening.

Community lobbying for a jetty commenced in 1879: the people believed that deep water in the bay would provide safer anchorage than other nearby locations. Eventually in 1882 construction of a jetty was undertaken by Frank George. Originally 155 metres long, it provided a depth of 2.1 metres at low tide. When lime burning became an established industry at Wool Bay the jetty was extended by a further 18 metres in anticipation of increased use. During this time, a steamship service dropped off and picked up provisions three times a week. When bulk-handling of grain was introduced at Port Giles in 1970, Wool Bay's importance as a port dwindled.

Today, the jetty at Wool Bay is popular with anglers. It is known for producing good catches of Squid and tommies throughout the year while Garfish, Mullet and Snook and other species can be caught in season. The jetty is also used by recreational scuba divers, drawn by the population of leafy sea dragons that can be found inhabiting the waters beneath the jetty.

All content from Kiddle encyclopedia articles (including the article images and facts) can be freely used under Attribution-ShareAlike license, unless stated otherwise. Cite this article:
Wool Bay, South Australia Facts for Kids. Kiddle Encyclopedia.