Kids Encyclopedia Facts
Not to be confused with Common seadragon.

The leafy seadragon (Phycodurus eques) or Glauert's seadragon, is a marine fish in the family Syngnathidae, which includes seadragons, pipefish, and seahorses. It is the only member of the genus Phycodurus.

It is found along the southern and western coasts of Australia. The name is derived from the appearance, with long leaf-like protrusions coming from all over the body. These protrusions are not used for propulsion; they serve only as camouflage. The leafy seadragon propels itself by means of a pectoral fin on the ridge of its neck and a dorsal fin on its back closer to the tail end. These small fins are almost completely transparent and difficult to see as they undulate minutely to move the creature sedately through the water, completing the illusion of floating seaweed.

Popularly known as "leafies", it is the marine emblem of the state of South Australia and a focus for local marine conservation.

Much like the seahorse, the leafy seadragon's name is derived from its resemblance to another creature (in this case, the mythical dragon). While not large, they are slightly larger than most seahorses, growing to about 20–24 cm (8–9.5 in). They feed on plankton and small crustaceans.

The lobes of skin that grow on the leafy seadragon provide camouflage, giving it the appearance of seaweed. It is able to maintain the illusion when swimming, appearing to move through the water like a piece of floating seaweed. It can also change colour to blend in, but this ability depends on the seadragon's diet, age, location, and stress level.

The leafy seadragon is related to the pipefish and belongs to the family Syngnathidae, along with the seahorse. It differs from the seahorse in appearance, form of locomotion, and its inability to coil or grasp things with its tail. A related species is the weedy seadragon, which is multicoloured and grows weed-like fins, but is smaller than the leafy seadragon. Another unique feature is the small, circular gill openings covering tufted gills, very unlike the crescent-shaped gill openings and ridged gills of most fish species. 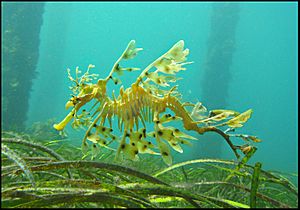 The leafy seadragon is found only in southern Australian waters, from Wilson’s Promontory in Victoria at the eastern end of its range, westward to Jurien Bay, 220 km (140 mi) north of Perth in Western Australia. Individuals were once thought to have very restricted ranges; but further research has discovered that seadragons actually travel several hundred metres from their habitual locations, returning to the same spot using a strong sense of direction. They are mostly found over sand patches in waters up to 50 m (160 ft) deep, around kelp-covered rocks and clumps of sea grass. They are commonly sighted by scuba divers near Adelaide in South Australia, especially at Rapid Bay, Edithburgh, and Victor Harbor.

Leafy seadragons usually live a solitary lifestyle. When the time comes, males court the females, they then pair up to breed. From the moment they hatch, leafy seadragons are completely independent. By the age of two, they are typically full grown and ready to breed.

The species feeds by sucking up small crustaceans, such as amphipods and mysid shrimp, plankton, and larval fish through its long, pipe-like snout.

As with seahorses, the male leafy seadragon cares for the eggs. The female produces up to 250 bright pink eggs, then deposits them onto the male's tail with her ovipositor, a long tube. The eggs then attach themselves to a brood patch, which supplies them with oxygen. After 9 weeks, the eggs begin to hatch, depending on water conditions. The eggs turn a ripe purple or orange over this period, after which the male pumps his tail until the young emerge, a process which takes place over 24–48 hours. The male aids the hatching of the eggs by shaking his tail, and rubbing it against seaweed and rocks. Once born, the young seadragon is completely independent, eating small zooplankton until large enough to hunt mysids. Only about 5% of the eggs survive. Once the eggs have hatched, each individual leafy seadragon have small yolk sack externally attached to them. This sac provides them food for the next few days. Once the eggs have hatched, the newborns can go off and hunt immediately afterwards. This sac is like a safety net for leafy seadragons for the next few days.

The leafy seadragon uses the fins along the side of its head to allow it to steer and turn. However, its outer skin is fairly rigid, limiting mobility. Individual leafy seadragons have been observed remaining in one location for extended periods of time (up to 68 hours), but will sometimes move for lengthy periods. The tracking of one individual indicated it moved at up to 150 m (490 ft) per hour.

Leafy seadragons are subject to many threats, both natural and man-made. They are caught by collectors, and used in alternative medicine. They are vulnerable when first born, and are slow swimmers, reducing their chance of escaping from a predator. Seadragons are often washed ashore after storms, as unlike their relative the seahorse, seadragons cannot curl their tails and hold onto seagrasses to stay safe.

Due to being protected by law, obtaining seadragons is often an expensive and difficult process as they must be from captive bred stock, and exporters must prove their broodstock were caught before collecting restrictions went into effect, or that they had a license to collect seadragons. Seadragons have a specific level of protection under federal fisheries legislation as well as in most Australian states where they occur. Seadragons are difficult to maintain in aquaria. Success in keeping them has been largely confined to the public aquarium sector, due to funding and knowledge that would not be available to the average enthusiast. Attempts to breed the leafy seadragon in captivity have so far been unsuccessful. Aside from the legalities, leafy seadragons cost between $10,000 and $15,000 a piece, prohibitive to most collectors.

Australian aquaria featuring leafy seadragons include the Sydney Aquarium, the Melbourne Aquarium, and the Aquarium of Western Australia.

Ripley's Aquarium of Canada in Toronto displays both leafy and weedy seadragons. 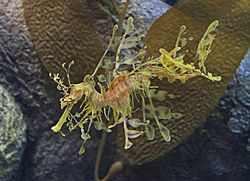 A number of aquaria in the United States have leafy seadragon research programs or displays. Among these are the Adventure Aquarium in Camden, New Jersey, Aquarium of the Pacific at Long Beach, the Birch Aquarium at Scripps, San Diego, the Minnesota Zoo, the Monterey Bay Aquarium in California, the Dallas World Aquarium, Texas, the New England Aquarium, Boston, the Point Defiance Zoo & Aquarium in Tacoma, Washington, the Shedd Aquarium, Chicago, the California Academy of Sciences, the Tennessee Aquarium, Sea World Orlando, Florida, the Pittsburgh Zoo & PPG Aquarium,, Ripley's Aquarium of the Smokies, Gatlinburg, Tennessee, and The Florida Aquarium in Tampa, Florida. and the Mote Aquarium in Sarasota, Florida., Ripley's Aquarium Broadway at the Beach, Myrtle Beach, South Carolina.

All content from Kiddle encyclopedia articles (including the article images and facts) can be freely used under Attribution-ShareAlike license, unless stated otherwise. Cite this article:
Leafy seadragon Facts for Kids. Kiddle Encyclopedia.