The Minnesota Zoo (formerly the Minnesota Zoological Garden), is an AZA-accredited zoo in Apple Valley, Minnesota. It is one of two state-supported zoos in the United States, with the other being the North Carolina Zoo. When it opened on May 22, 1978 it was fairly revolutionary in its exhibit design. The zoo, built in a suburbanizing rural area, had more space to house exhibits and was one of the first zoos to organize its animals by their living environment as opposed to their species. Exhibits are arrayed in six themed areas, including three themed walking trails ranging from one mile (1.6 kilometers) to two miles (3.2 kilometers) in length:

The Minnesota Zoo is a state agency. This differs from other zoos in Minnesota and most others in the United States, which are run by municipalities or private organizations. The Minnesota Zoo charges admission and sells annual memberships.

It is also home to a high school, the School of Environmental Studies. 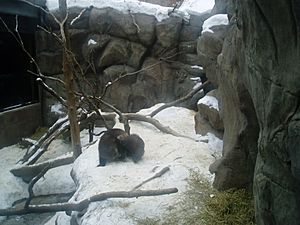 Wolverines on the Minnesota Trail

The Medtronic Minnesota Trail features animals native to Minnesota. The trail, which had been nearly the same since it opened in 1978, was reopened in 2007 after a year-long renovation. The trail now features a "north woods" look and includes exhibits for raccoons, coyotes, and gray wolves together with long-time residents like beaver, otter, puma, and lynx. Smaller Minnesota animals, like turtles, frogs and salamanders are featured in the exhibit’s “trailhead,” which is styled after a lodge. The quarter-mile trail takes guests through more than fifteen wildlife exhibits where they experience a variety of Minnesota landscapes, ranging from views into a beaver pond, a walk alongside a northern forest glade and a bird-watching perch in the treetops. The Minnesota Zoo received the Association of Zoos and Aquarium’s (AZA) 2008 Significant Achievement Award for this trail. Animals in this area include: 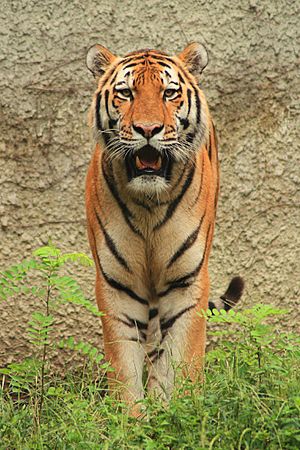 An Amur tiger at the Minnesota Zoo 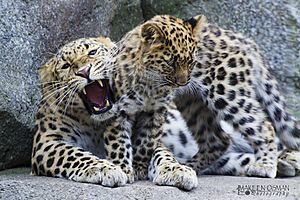 Leopard with cub at the Minnesota Zoo

The 3/4 mile Northern Trail lets visitors to animals found north of the 45th parallel. The Northern trail could also be seen from the zoo's monorail which was run year round, but permanently closed on Sept 2, 2013 as the trains were outdated and hard to find new parts for. Animals in this area include:

Part of the Northern Trail is planned to be replaced by a future exhibit called Asian Highlands. The exhibit will be divided into two: Edge of the Himalayas and Mongolian Steppe. Edge Of the Himalayas will feature snow leopards, musk deer, tragopans, markhors, and red pandas. Food carts, sheltered seating areas and restrooms will be strewn throughout the area.

The Mongolian Steppe will be seen on the exhibit's north side. Pallas cats will be featured in a side exhibit while herds of Asian wild horses, camels, onagers and gazelles roam on a field behind the cats. A camel ride will take visitors along part of the exhibit. 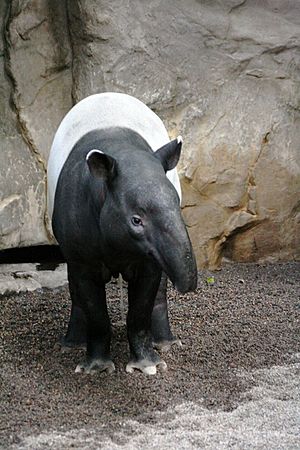 A Malayan tapir at the Minnesota Zoo

The Tropics Trail is an indoor trail that gives the impression of being in a tropical rainforest. Animals in this area include:

Discovery Bay contains several aquariums with a combined 1,100,000 US gallons (4,200,000 l) of water. Guests have an opportunity to touch sharks, rays, sea stars and sea anemones in the interactive estuary and tide pool. At the entrance to the Tropics building, you can see the Wyland mural titled “Our Ocean Family,” dedicated on September 8, 1997. Animals in this area include:

Dolphins were exhibited at the zoo since its opening in 1978 until 2012.

In March 2006, Rio, died at 35. She came to the Minnesota Zoo from the New York Aquarium in 1980. Rio gave birth to four calves at the Minnesota Zoo. One of Rio's calves, 7 month old Harley, died earlier in January 2006 in a freak accident. He had been learning to swim between the pools when he jumped out of the water and hit his head on the deck between the pools. Another dolphin, "Ayla", who suffered from Scoliosis or curvature of the spine, was euthanized at age 14 in December 2006. She had stopped eating and stopped responding to her medication. At that time the remaining dolphins at the zoo were "Spree," "Chinook" and "Semo."

In 2007, the zoo shipped Chinook, a 24-year-old male, to the National Aquarium in Baltimore. Chinook was moved because the aquarium had seven adult females and no adult males. Chinook fathered a calf and then moved to the Brookfield Zoo in 2010.

Two females; "Allie", and her mother, "April" were additions to the Minnesota Zoo's bottlenose dolphin family in 2008. Both arrived on January 14, 2008 from Dolphin Connection in Florida.

In September 2009, three bottlenose dolphins from the Brookfield Zoo arrived at the Discovery Bay habitat while their home stadium, the Seven Seas Dolphinarium, was being renovated. The three dolphins, Tapeko, and her daughters Noelani and Allison, remained in Minnesota for roughly six months until the tank in Brookfield was completed in the spring of 2010. This eventually brought the Minnesota Zoo's dolphin population up to 7. On April 15, 2010, Tapeko, Noelani, and Allison, made the return trip back to the Brookfield Zoo. Spree too was sent to Brookfield after it was decided she would have a better chance at acclimating herself to their social structure as she was generally out casted by Semo, April and Allie.

Semo had impregnated Allie in Mid 2008. However, Allie suffered a stillbirth on March 26, 2009, much to the disappointment of zoo staff. In November 2009, it was confirmed by ultrasound that Allie was pregnant yet again, by Semo this time as well. The female calf was born on July 17, 2010, and through a Facebook vote was named Tajiah in late 2010. By January 2011, the pod consisted of 47-year-old Semo, 42-year-old April, her 23-year-old daughter Allie, and Allie's 6-month-old calf Taijah.

Dolphin shows at the zoo were put on hiatus in 2011. With Semo in his mid 40s, the zoo felt it was best for them to avoid the more high-energetic behaviors usually performed by the younger members of the group.

On February 15, 2011, April died and a necropsy was pending to determine cause of death. April was around 42 years old, making her one of the older bottlenose dolphins known in human care.

In all, a total of 19 dolphins have been housed at the zoo over the years: Semo, Flipper, April, Rio, Vince, Mindy, Chinook, Allie, Shadow, DJ, Ayla, Mindy's 1997 stillborn, Spree, Harley, Tapeko, Noelani, Allison, Allie's 2009 stillborn, and Taijah. As of 2013, Semo, Tapeko, Chinook, Allie, Shadow, Spree, Noelani, and Allison are still alive. Flipper, April, and Rio all surpassed the average expected lifespan of a bottlenose dolphin at approximately 38 years, 42 years, and 35 years respectively.

End of the dolphin exhibit

On May 14, 2012, the zoo announced that the dolphin exhibit would come to a permanent end come fall. The Minnesota Legislature had recently granted the zoo $4 million towards the renovation of the Discovery Bay dolphin tanks, which were in need of repairs. The zoo had originally intended to temporarily transport its two remaining bottlenose dolphins, Semo and Allie, to other zoos or parks until renovations were complete, but the decision was made to end the dolphin exhibit once Semo and Allie were shipped out.

It was unclear where Semo and Allie will be shipped, it was assumed that because the Minnesota Zoo was part of the Dolphin Consortium (essentially a program that ensures genetic diversity among captive bottlenose dolphins), which consists of The Seas with Nemo and Friends at Epcot, the National Aquarium in Baltimore, Indianapolis Zoo, Dolphin Connection, Texas State Aquarium, and the Brookfield Zoo; one or the other were planned to be shipped to one of these locations. Semo's transfer has been dubbed a transfer into "retirement". At nearly 50 years old, he is one of the oldest surviving male dolphins in human care.

Hawaiian monk seals now reside in the dolphin tank. Director Lee Ehmke mentioned that in the future, perhaps a slim chance will come along that will allow the return of dolphins to the Minnesota Zoo.

On October 3, 2012, Semo and Allie were transferred out of the zoo. Semo was moved to Six Flags Discovery Kingdom in Vallejo, California, while Allie was sent back to the Brookfield Zoo just outside Chicago.

In May, 2015, The Minnesota Zoo welcomed five critically endangered Hawaiian monk seals. The seals; "Nani", "Koa", "Ola", "Paki", and "Opua" are all female and were transferred to the zoo from SeaWorld San Antonio. All had been previously rescued after having been discovered malnourished and subsequently deemed unreleasable. The seals will act as ambassadors to their critically endangered wild cousins as the zoo plans to offer daily, educational demonstrations with the seals in the newly upgraded "Discovery Bay" marine mammal tanks which housed the zoo's resident bottlenose dolphins up until 2012. 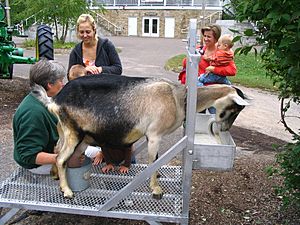 Milking a goat at the farm

The Wells Fargo Family Farm, which opened in May 2000, allows guests to touch and interact with domestic animals. The Farm exhibit showcases goats, sheep, pigs, cows, chickens, and horses in a beautiful farm landscape. The Farm, a seasonal exhibit, is open every day beginning in April; the popular "Farm Babies" event marks the beginning each year. The Farm closes each fall for the season. The zoo has also created an interactive game about the farm called "Who Pooped @ the Farm". The farm also gives a chance for visitors to watch the staff milk the cows. 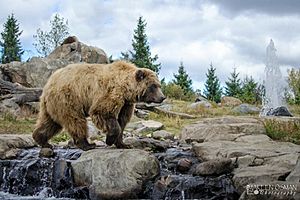 Russia's Grizzly Coast gives visitors a chance to see animals that live around Russia's Pacific coast, including sea otters, grizzly bears, Amur tigers, Amur leopards, and wild boars in environments reminiscent of their homes in the Russian Far East. The 10,116-square-meter (2.5-acre), $23 million facility was the most expensive project to date at the zoo, and opened in June, 2008.

3M Penguins of the African Coast

On July 9, 2011, the zoo premiered a new exhibit focused on African penguins.

One of the first and perhaps most popular exhibits at the zoo was the beluga whale exhibit. The exhibit was home to two belugas, a male by the name of Anookalik (nicknamed "Big Mouth"), and a female by the name of Anana (nicknamed "Little Girl"). In later years, a bone infection was found within "Big Mouth's" jawbone (resulting from a collision with one of the tank fixtures) and forced immediate transfer of both whales to SeaWorld San Diego in the hopes of obtaining a more sophisticated means of veterinary treatment. In April 1987, a crowd of nearly 30,000 people filled the gates of the Minnesota Zoo to bid their final farewells to the two whales, who were transferred out of the zoo shortly thereafter. Little Girl died of heart failure on June 13, 1989, at the age of fourteen. Big Mouth, whose bone infection eventually proved to be fatal, was euthanized on July 16, 1990, at the age of seventeen.

All content from Kiddle encyclopedia articles (including the article images and facts) can be freely used under Attribution-ShareAlike license, unless stated otherwise. Cite this article:
Minnesota Zoo Facts for Kids. Kiddle Encyclopedia.