The aquarium opened on 13 April 1988 as Underwater World, Perth. It was acquired by the current owners, Coral World International and Morris Kahn, in 1991, and changed its name to AQWA The Aquarium of Western Australia on 1 January 2001.

AQWA (then Underwater World, Perth) opened with only two aquariums, the feature walk-through aquarium, now known as the Shipwreck Coast, and the Touch Pool. It now includes more than 40 exhibits and is the 10th largest aquarium in the world.

From 1992 to 1999 the aquarium hosted a family of dolphins enclosed in a sea pen, which later died due to poisoning. 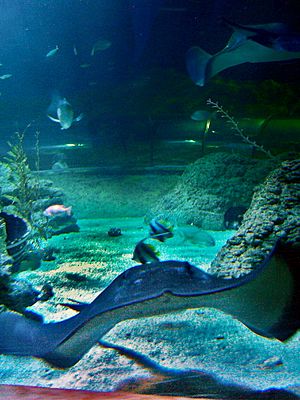 Stingray in the main tank

These include: The Great Southern, the Shipwreck Coast, the Perth Coast, the Far North and Marmion Marine Park.

The facility is host to two premiere feature exhibits: 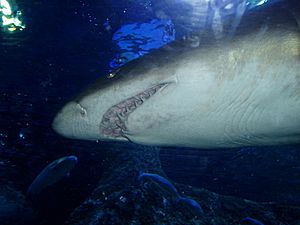 Grey nurse shark at the aquarium

For a fee, snorkelers and qualified scuba divers can get even closer to the fish, sharks, rays and turtles by joining the aquarium's dive master in the Dive or Snorkel with Sharks program. It is held daily in the main Shipwreck Coast aquarium.

Seasonally, AQWA also runs the Reefwalker program, where capable swimmers over the age of 12 are able to enter the coral reef and discover scuba diving. No qualifications are required. Using a custom-made hookah scuba unit, participants are led by an experienced AQWA dive instructor, as they walk underwater through the living reef which features hundreds of corals and fish. It runs Friday–Sunday between October and April.

All content from Kiddle encyclopedia articles (including the article images and facts) can be freely used under Attribution-ShareAlike license, unless stated otherwise. Cite this article:
Aquarium of Western Australia Facts for Kids. Kiddle Encyclopedia.